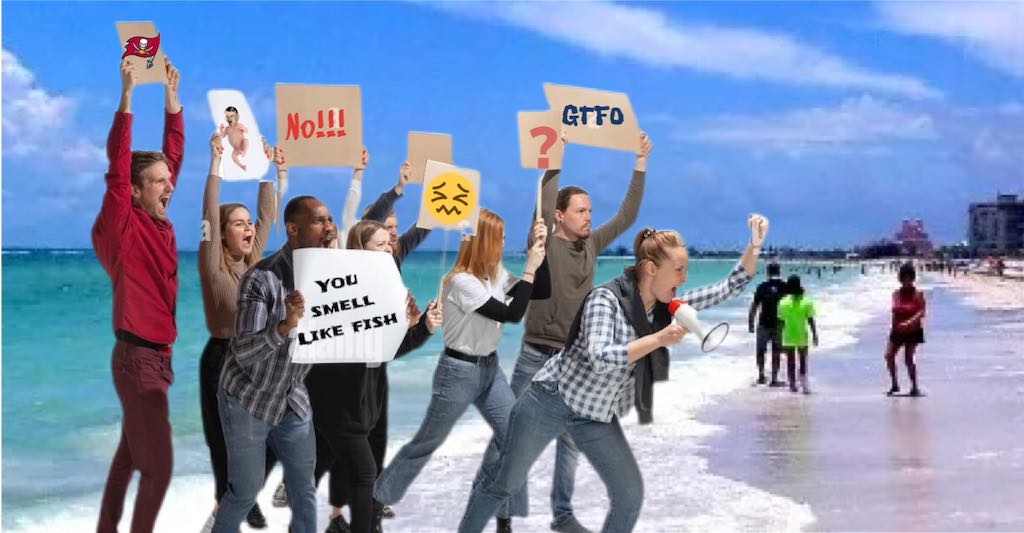 After an estimated 4.5 billion years of existence, the ocean is being cancelled on social media after a large group of people have continued to point out the atrocities the ocean has committed against humanity.

The “Cancel the Ocean” movement has gained 65,000 digital signatures which means it has forced The White House to consider taking serious action against the ocean.

Abe Merman, the head of the Cancel the Ocean movement, spoke at an in-person rally in front of the Bronx aquarium about why the issue is so urgent.

“400 people drown every day! Countless boats and sea-vessels have been capsized since the dawn of time, and millions, if-not billions of people, have died at the hands of the murderous body of water which is the global ocean!” Merman shouted through a bullhorn atop of milk crate to a roar of thunderous cheers from the dozens of supporters.

“Not to mention that the ocean houses millions of murderous creatures such as sharks and whales and dolphins, are we going to let the ocean get away with being friendly to murderers? The ocean is giving these things a place to thrive and continue their destruction! It needs to be stopped!” Continued Merman.

I was able to talk one-on-one with Merman after the rally and dive deeper (excuse the pun) into why he felt so passionately about cancelling the ocean.

“I used to love the ocean as a child, my family, we would all go to Reddington beach when we were young, we’d splash around, build sandcastles, make sand angels. All the normal beach family stuff.” Then Merman began tearing up.

“Then one summer, my brother and I had an ocean drinking contest…” Merman had to stop his sentence to compose himself.

“We filled up empty 2 liter bottles of Orange Crush we had left over from the picnic earlier that day, and we took turns filling them up in the ocean and drinking the water… After 6 full 2 liters, my brother dropped and began having a seizure… He was only 26. He died right then and there on the beach. And the ocean had no remorse. I just stared at it, waving back at me. It didn’t stop to see if my brother was ok. It didn’t care at all. 6 years later, I knew I had to dedicate my life to cancelling the ocean.” Merman then began unchanging in front of me and put on swim trunks.

“What are you doing?” I asked.

“Oh.” He said, surprised as if he had forgotten we were mid interview.

“What?” I asked appropriately surprised.

“You just gave a long arduous speech about how much you hated the ocean and wanted it to be cancelled.” I said, trying to enlighten him to his own hypocrisy.

“Oh, yea, no that’s true, I do hate the ocean, but there’s no pool around my neighborhood, and I’m part of an adult swim-team, so I need to get some practice in before my upcoming meet.” Said Merman nonchalant and matter-of-factly.

“So you hate the ocean and want it ‘cancelled,’ whatever that could possibly mean, but you still go swimming in it all the time?” I asked, stunned.

“Yep, you nailed it.” Said Merman, as he gave me a thumbs up and rubbed black streaks under his eyes like a football player.

“Now if you don’t mind, I need to ride this electric scooter to the beach and get my laps in.” He said, putting on a large black helmet and hopping on to the nearest e-scooter, then jetting down the sidewalk towards the beach.

I turned to the nearest person who happened to have been cheering at the rally.

“Abe Merman just talked for an hour about cancelling the ocean, which again I’m still not even sure what that entails, and now he’s off to swim in the ocean?” I questioned with a plea of impassioned confusion.

“He’s got a swim meet coming up and he doesn’t have a pool in his neighborhood, that’s the only place he can get his laps in.” The supporter said.

“Don’t you see the hypocrisy in that?” I asked getting more frustrated in people’s lack of comprehension to the situation.

“Listen man, we’re all hypocrites.” The supporter snapped back.

“I don’t know what rag you write for, but we don’t need another person trying to drag us down with some negativity. What’s your deal? You think you can just come out here and expose our leader and try to stop our movement to cancel the ocean? Get a life dude, nobody cares.” Said the supporter anticlimactically before hoping onto his long board.

“Yo, we’re headed to the beach!” Shouted the supporter to a group of other people who had just been cheering for Abe Merman as well, to an enthusiastically-received “woo.”

After realizing that none of this made sense I pulled out my radioactivity reader which was reading off-the-charts.

“Ah, ok. This makes sense.” I said to myself, watching the needle of the radioactivity meter bounce higher and higher.

“These people are all contaminated and have had their minds inverted during the nuclear holocaust last weekend.” I reasoned.

I was no longer upset about peoples rash behavior or lack of logic. I understood that everyone around me had suffered mental hemorrhages from the radioactivity in the area. It wasn’t their fault.

I put the radioactivity meter to my chest.

The reading was also off-the-charts.

“This means I’m radioactive now too. I’ve spent too much time here.”

I called my wife to let her know I probably wasn’t going to make it home that night. I told her I loved her and our 2 dogs, Cougar and Bandit. I told her that it’s a shame we weren’t able to start a real family with children like we always wanted, but it’s a cruel world and things aren’t always fair.

Odds are this will be my last Tampa News Force article unless I’m able to write a few more before the radioactivity does a number on my brain.

I figured it would always end like this, I just wasn’t sure when.

It’s been a pleasure writing for TNF, and if this is the last you ever hear of me, it’s been a wonderful ride and I don’t regret anything.

Well almost anything, I do wish I took that genie up on his offer 2 months ago when he asked me if I would like to be impervious to radioactivity.

The genie said, “Are you sure? Because it’s no trouble to me and I can do it in a snap of my fingers. On the house, no charge, simply because you freed me from my prison of life under that billionaire CEO of the fruit drink company.”

I said, “No, no, it’s ok. Just give me directions to the nearest Philly cheesesteak shop and we’ll call it square.”

I really wish I had taken that genie up on his offer.