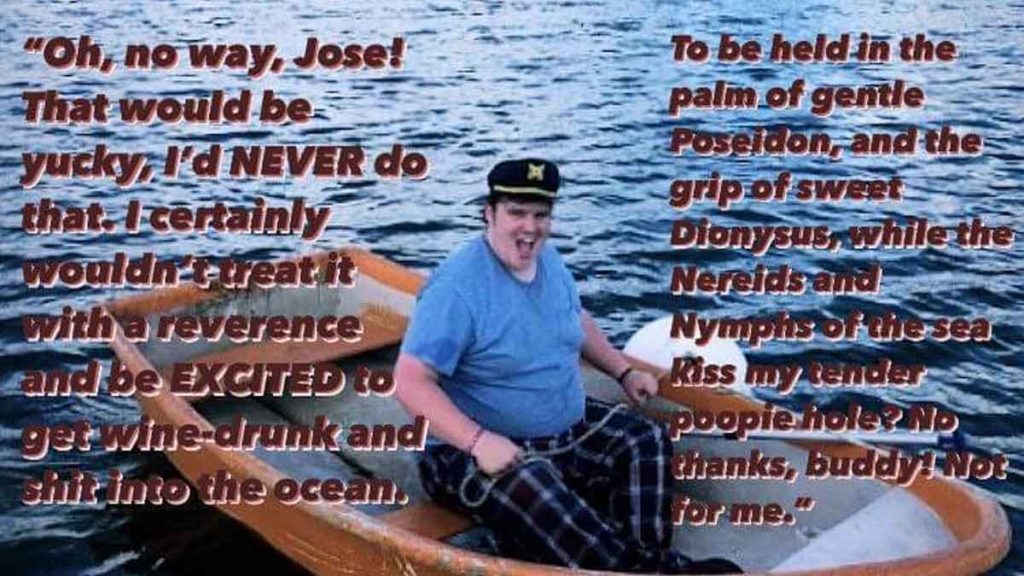 With rent sky-high, more Tampa Bay residents than ever are looking to live landlord-free aboard an anchored sailboat. You can find many fixer-upper functioning sailboats for only a few thousand or even a few hundred dollars on craigslist. Tampa News Force’s most trustworthy local News-Talker Chris Coon opens up on his experience living aboard a sailboat for the summer of 2019. Here’s the former Captain’s review!

So, you’re thinking about living on the sea! There’s a ton of nautical vocabulary to learn. The onboard toilet of a boat is called the head. A couch on a boat is called a settee. And a broken alcoholic who just got dumped is somehow, a Captain.

I lived aboard a boat for 5 or 6 months. I like the word ‘aboard.’ It means ‘on,’ but only for boats and trains. I anchored off the shore of New College in Sarasota Bay. It was a ramshackle vessel I bought from the estate of a dead Quebecois man named Gaetan-Joseph. He died of bowel cancer. They told me because I asked. Every day, I rowed 200 feet to shore and back from my mooring in a 12-foot orange dinghy with one singular canoe paddle, and I never used the onboard toilet.

Sometimes I would use restrooms on shore, but if it was night, I would strip completely naked and lower myself into the sea and joyfully, secretly poop a marine meconium into the waves.

It’s important to enjoy when you shit. We all have to do it, but we can’t all enjoy it. Some of us get bowel cancer. Some of take a poop at the doctor, get the results back, and can never truly like shitting again.

One day, on shore, I was charging my phone—I couldn’t charge it from the middle of Sarasota bay—and a well-off transplanted Frenchman neighbor of mine asked me “Hey, you have an onboard toilet, right?” And I told him, as lyingly as I could, “Yes, of course, and I love using it. Did you know the onboard toilet of a boat is called the head?”

Undeterred, he persisted: “Okay because a few of the neighbors were worried you were shitting directly into the sea.”

I blinked a little. It’s weird to be committing an inscrutable crime for no discernible benefit and then be nearly caught for it. Captain’s tip: you can always use ‘Who would even do something like that??’. In that case, the person questioning you has to establish 1) you did something insane, and 2) you just lied about it to their face, and C) they still don’t know why you did it.

So that’s what I did. I said to him, “Oh, no way, Jose! That would be yucky, I’d NEVER do that. I certainly wouldn’t treat it with a reverence and be EXCITED to get wine-drunk and shit into the ocean. To be held in the palm of gentle Poseidon, and the grip of sweet Dionysus, while the Nereids and Nymphs of the sea kiss my tender poopie hole? No thanks, buddy! Not for me.”

He did not believe me. But what could he do? Search Sarasota bay for a loose poopie and take it to the local poopie crime lab? It’s a charge that’s difficult to prove, and bold to suggest, yet he seemed convinced I had done it. Which I had.

He just narrowed his eyes and submitted to my refusal to confess. His jaw was serious, but his eyes seemed more baffled than punitive. As if he only needed me to confess because some part of him needed a good explanation.

I should add: Sarasota bay is famously bioluminescent, particularly so at depths of 6-10 feet, where I was moored, and also at that time of year, early June. When I would tread water at night, a sort of bubbly greenish baja-blastish underwater light would emanate unevenly from my movements and last maybe 1-2 seconds. The color that a pool light shines in a memory of trespassing to impress a girl who used to love you.

Most evenings I would drink Yago sangria in my 28 foot sloop-rigged poorly maintained 1987 Hunter, put on a bisexual youtube videoessayist through my phone speakers on the deck of the boat, strip naked, lower myself on the back ladder down into the sea and do naked space magic lightup ocean karate to my heart’s content. I wasn’t silent by the way. I dare you to make an aura of Aurora Borealis tracer light appear from your finger tips and not make sound effects. Fwoosh. A gurgling flash of teal. Choop. A gleam of emerald floating to the surface. Zoop. The color of her eyes.

This was also when I would shit. It was cast into the bay but it’s not pollution. It’s not a public pool, it’s the living active worldwide ocean. Everybody poops and globally, most of us life forms live in the sea. What does one overweight man compare to the aquatic biomass of Sarasota bay?

It didn’t feel gross. It was decadent. It was luxurious. A human in utero is bent in the exact same way as a man shitting into the sea holding onto a boat ladder.

The sailboat shifts rhythmically between the pulls from the mooring chain, and the wind, and the current. The waves smack into your chest, the spray hits your shoulders and when you look up at the stars, you feel small but alive and significant.

Shitting and sitting are an unfortunately frequent combination. Like fun lovers and alcoholics.

Sitting and shitting is fine. It’s fine. If you have some compulsion to keep your head as far off the ground as you can. If you can’t stand to grow by shrinking. But stooping for pooping? Stooping and pooping is the way God made it. It’s grand. There’s no pushing. There’s no wiping. Just blissful, easy peristalsis. Try it sometime.

And the ocean isn’t a land mark you’re near. It’s where you are. You’re in it. You’re buoyant. Your eye level is 8 inches over sea level and your whole weight is  attached to the rocking vessel by the tiny muscles in your primate hands and the barely tensed muscles at the balls of your feet.

You can see the bioluminescence activate in the crashing surf under the stern of the boat every few seconds. The water swirls around you. Laminar flow of living water constantly & confidently switching directions like billions of Caribbean drivers. If it seems chaotic, you just don’t understand it yet.

You feel the water, 80 degrees fahrenheit, all over your skin, like a bath you took before you got too big to adequately enjoy baths. Like a bath at your grandmother’s house. You feel the outline of you in one tactile image. You feel the water, particularly. You notice it. It’s right there, swirling around the eye of the storm. Kissing the pucker. Knocking on your backdoor like a lifelong friend. It feels nice.

You push. Barely. Effortlessly. Beholding creation at night. As the ladder and stern rise and fall you see the churning green undersea foam activate beneath the boat, and although you can’t see it, you know that the motion of the poop starting out of you has lit up your butthole with bioluminescence, perhaps inspiring passing fish. You look up at the stars. You look at Orion. Look at the star in the middle of his belt. How unknowable is that star? Glorious. Gemlike. Incomprehensible. Is that what the fish see?