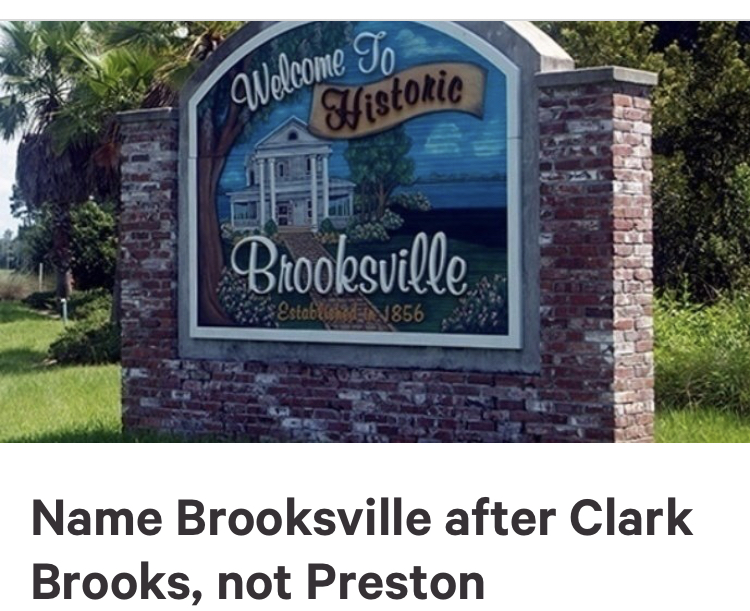 The town of Brooksville, Florida is named after Preston Brooks. He was an American politician and Member of the U.S. House of Representatives from South Carolina, serving from 1853 until his resignation in July 1856 and again from August 1856 until his death. His most notable “accomplishment” was attacking Senator Charles Sumner, an abolitionist, and beating him nearly to death with a cane on the floor of the United States Senate in retaliation for an anti-slavery speech. He was a REALLY big fan of slavery.

And they named a town after him.

By comparison, consider Sally Ride, who was an American astronaut and physicist, the first American woman in space in 1983 and is still the youngest American astronaut to have traveled to space, having done so at the age of 32. She has a naval research ship and two elementary schools named after her.

Preston Brooks was a racist who never went to space and he has a whole town.

The time has come to make a change.

I realize that changing the name of a town that’s been around for 150 years is not a simple undertaking. Signs would need to be changed. Business cards and stationery would be rendered obsolete. Somebody at Google would have to devote about 20 minutes to updating the internet.

That’s why I’m here with a simple yet comprehensive and effective fix: name it after me! It would still be Brooksville because… my name is Brooks! Almost no significant changes would be necessary and yet we would no longer be paying tribute to an avowed racist. Everybody wins!

Now, I know the big question this raises: “Who the hell is Clark Brooks and why should we name the town after him?” My answer to that is to present my resume…

The other big question is, “why not re-name it after Sally Ride?” and I don’t have an answer to that.