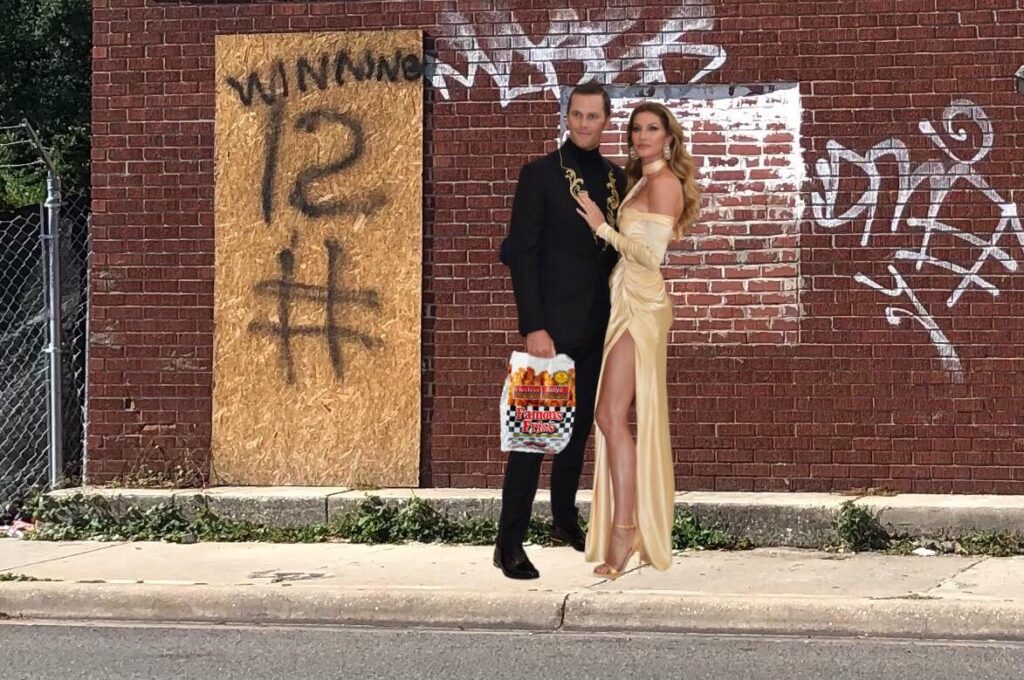 “Since I signed my contract extension and I’m going to be here a while, I figured it was time to put down some more permanent roots,” Brady said. “Staying at Jeter’s place has been nice; life is pretty sweet on Davis Island when Alex Killorn isn’t harassing you on his jet ski. But this place feels more like home.”

The 4372 square foot, two-story residence is located on a 6490 square foot lot at 804 E. Floribraska Avenue, and was listed for sale at $225K by realtors who described the area as “Tampa’s next new hip neighborhood”, “ripe for gentrification” and “sketchy AF”.

Brady said he fell in love with the property as soon as he saw the victory mural spray painted on the front door. “There have been lots of great murals posted around town celebrating us winning Super Bowl LV but this one really spoke to me. It just says ‘Winning #12’, which is me and what I’m all about. The artist really captured the essential TB12.”

There are several other aspects about the location that appeal to Brady. “There’s a Checkers right next door! I can walk over and get seasoned fries any time I want, and I do! Steven Stamkos thinks he’s so cool because there’s a Publix conveniently located between his place and Amalie Arena but that’s nothing compared to living next door to a Checkers. Suck on that, Stammer!”

Brady also cited the availability of nearby shopping as very appealing. “There’s both a Family Dollar and a Rent King just four blocks from here! And I’ve been told you can get anything you could ever want at the Sunoco station. Giselle is going to love that!”

Brady and his family have already moved in and he said the neighbors have been very welcoming. “Gronk’s afraid to come over because he’s afraid of them but they’ve been awesome. I’ve been playing pick-up hoops with some of them and they love it. I win them lots of money.”

“Somebody said, ‘Tom Brady is there’ and I didn’t believe it; no way Tom Brady is going to ever even drive through Robles Park, let alone visit and hang out. Live there?? Please! So I bet on it and lost $10. “, said Greg Greggers, a frequent player at the Robles Park basketball courts. “But then I played with him and won that back and more. Old man can ball!”