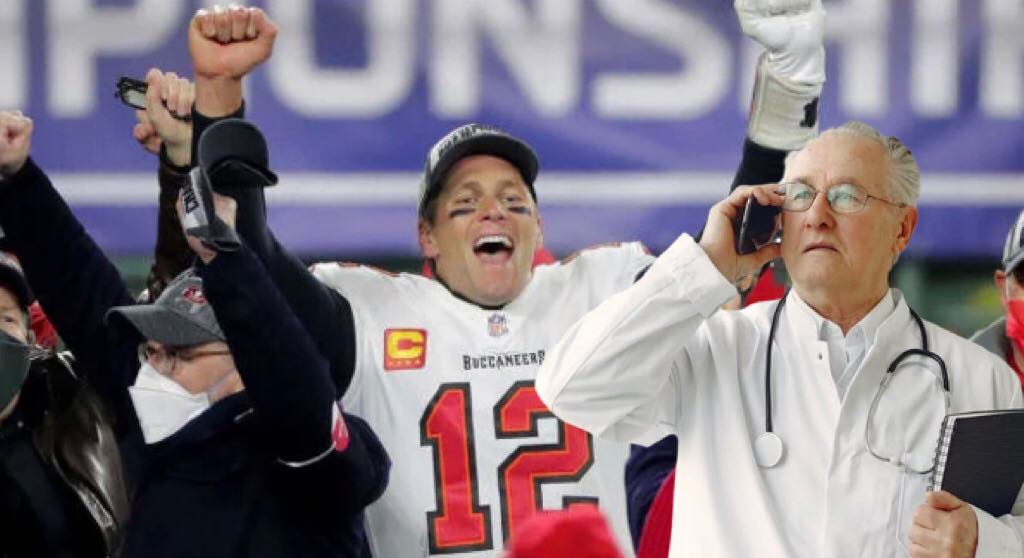 “We just received Tom’s test results,” said Dr. Dilgore Robinson, who was waving a clipboard in the air revealing the test results. “As you can see by these charts, our sports lord and savior, Thomas Edward Patrick Brady Jr., has tested positive for a good time.”

Dr. Robinson then smiled and nodded silently for an uncomfortably long time.

Brady has also tested positive for a good attitude, along with being positive for excellent teamwork mentality. Dr. Robinson then confirmed that we had nothing to worry about concerning his health during the big game.

“This man has the perfect amount of calcium and Vitamin D in his diet,” said Dr. Robinson. “I can tell, because I tested for it.”

Dr Robinson then went over to the wall and dimmed the lights of the hospital hallway.  He pulled out a flashlight and held it under his face as if he was about to tell us a ghost story.

“Now I want to tell you a quick ghost story,” Dr. Robinson said.

“Please don’t,” I said, visibly irritated that I had to park at the TGH garage and wait for many hours to get this scoop only for it to be some scam to come listen to this doctor try and tell me a ghost story.

“Beneath the very grounds of this hospital…” Dr. Robinson whispered.

“Aren’t there like some patients you should go and take care of?” I asked him.

“Quiet or you will miss the good part!” Hissed the doctor.

“As I said, the very grounds beneath us weigh very heavy with the darkness from below!” Dr. Robinson projected his voice loudly, commanding attention from everyone in the hallway. “But this building is a light that fights it back!”

Dr. Robinson walked up to a lady in a wheelchair, pushed her out of the way and climbed on top of a gurney that was behind her and continued his speech to the entire floor of confused doctors, nurses, and patients who had stopped what they were doing.

“And so, I say my brethren’s and sistren, while our battle is ongoing, the one that Brady will fight against the oncoming horde of Kansas City Chiefs, a name that is rather offensive, and should be protested against, but that is not what we are talking about today.  Today, we fight for our patients, and Brady will fight for positivity in our community, for an undying love of humanity, and the God given right to play ball.”

The nurses, doctors and patients that crowded the room began tearing up and applauding. A woman who became a paraplegic from a recent car accident stood up and then did a handstand. A janitor threw his mop on the ground, grabbed a nurse and started making out with her. The nurse pushed him off and smacked him in the face.

The Tampa Bay Buccaneers will face off against the Kansas City Chiefs at Raymond James Stadium for Super Bowl LV. We are predicting that the Bucs will win 58-56 in double over time, after a sack on Patrick Mahomes by Shaquil Barrett leads to a fumbled safety recovery.