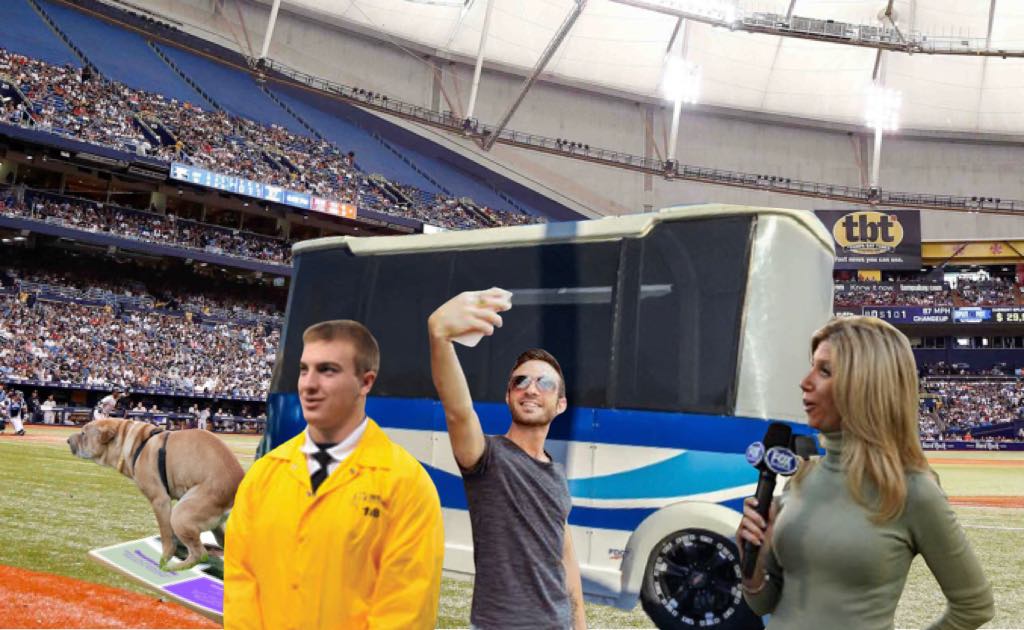 Is this headline an oxymoron or a double negative? I don’t know. It seems like it could be worded differently, but it’s supposed to mirror the article that ran earlier this morning, like a companion piece. What an utterly inconsequential thing to worry about. Just like the people on this list…

Is it possible to enjoy watching a game on TV without some talking hairstyle sharing the special insight gleaned from asking the coach what they need to do in the second half, who answers, “we need to score more points than they do and stop them from scoring as many points as we do” because that is always the only answer? It’s not only possible, it’s preferable.

What purpose are these idiots serving? Not the guy in the pink thong. His purpose is to bring joy and wonder to an audience of adoring fans in attendance at Super Bowl LV and viewing at home and that’s self-evident. He’s a delight. I mean the uniformed security guards who are paid to keep things like this from happening or at least respond effectively when they do, neither of which ever seems to happen. One guy has face-planted while losing his sweet Super Bowl snapback hat ala Charlie Brown getting smoked by a line drive. The other one is executing a Heisman Trophy cut… going the wrong way. Is being old, fat and out of shape a requirement for getting these jobs? Because if so, I may have a new career path. These clowns should just stand down and let some ill-tempered, 6’3″, 255 lb. linebacker who’s already on the field and in a bad mood because his team is down by 10 after his quarterback just threw a Pick 6 (“Pick 6” is what it’s called when an intercepted pass is returned for a touchdown, an exhaustively overused catchphrase constantly repeated by sports pundits like sideline reporters) handle it by dislocating the trespasser’s spleen because that’s what EVERYONE wants to see happen.

Tampa recently added an “autonomous” shuttle bus to it’s fleet of public transportation options that nobody uses. It’s an electric vehicle that runs on a “virtual rail”, a pre-determined route, without a human driver. Officials claim it’s actually safer than vehicles operated by human drivers.

“If somebody were to step out in front of the vehicle, compared to the reaction time of a human, it’s literally 10 times faster as far as its ability (to) perceive and react.”

Joe Moye, CEO of Beep, the company that sells and programs driverless buses

Yet, a human attendant is on the bus with a controller to override the program if necessary.

Slightly less useless than Life Coaches (see next entry), only because they might get you to spend your money on something useful and/or enjoyable. But still mostly useless; people possess the ability to find things they need and/or enjoy without the assistance of jackasses shooting videos of themselves at arm’s length that begin with “Hey guys…”

A “life coach” is someone you hire when you’re self-aware enough to know you need some help getting yourself together but not quite aware enough to avoid an obvious rip-off. They weren’t known as life coaches when they used to travel from town to town in a horse-drawn wagon, selling health remedy elixirs to rubes. Now they have web sites instead of wagons. Life coaches will charge you an hourly rate of $ALot in exchange for spitting bumper sticker, t-shirt, pseudo-pop psychology, sneakers ad, sports-inspired metaphors back at you. A life coaching session is like chugging a sports drink after a workout, except when you’re finished, you’ll still be thirsty. For an additional $200, these motivational “change agents” and catchphrase regurgitators will gladly sell you a three-ring binder full of “Eye of the Tiger”, “Go For It”, “Claim Your Power”, “See It And Believe It”, “Capture Your Dreams”, “Swing For The Fences”, “Inspire Your Desire” and other motivational bullshit nonsense.