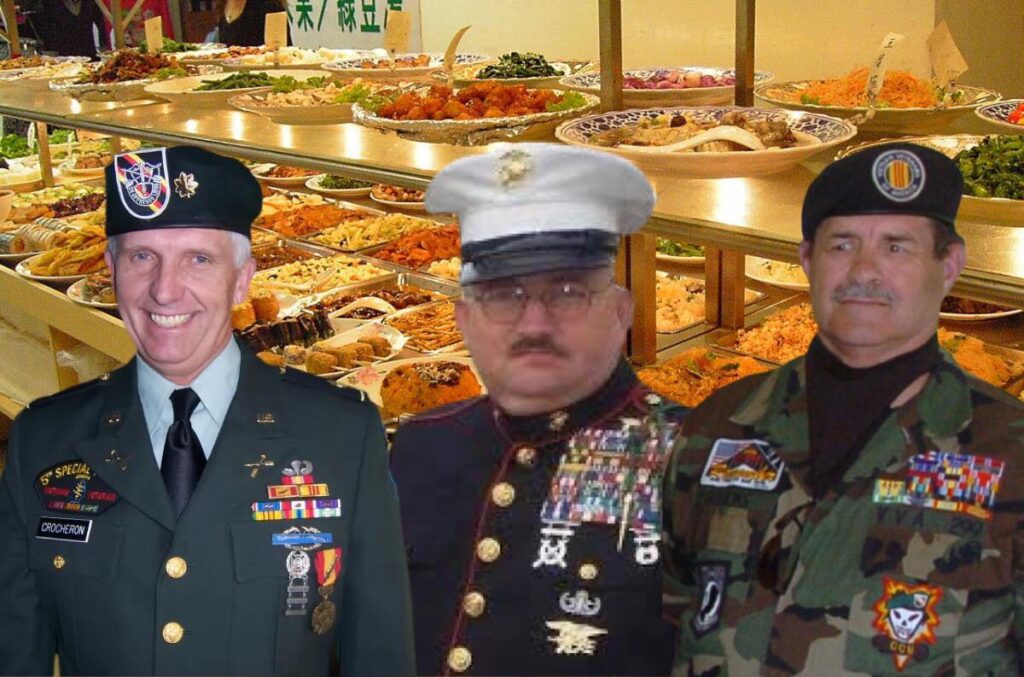 Today is a Veterans Day, the annual federal holiday during which we pay tribute and give thanks to all American veterans who served their country honorably during war or peacetime.

But why should those pampered Nancies get all the huzzahs and hallelujahs? That could just as easily have been you, if not for your lack of integrity and/or a spine. You probably had some kind of excuse, right?

You’ve never made a commitment to sacrifice anything for anyone else but just because you don’t deserve some sweet bennies doesn’t mean you shouldn’t get some. You like fancy uniforms and colorful medals even if you don’t like the level of commitment necessary to earn them. That should count for… something.

So here you go, you sorry-ass, wannabe gloryhound.

The best way to look like a hero from a distance is patches. Get yourself a satin jacket, preferably green or dark blue, and put some on there. They don’t have to be consistent with any branches or campaigns. They just have to be colorful and fun. You’ll look just like Tom Cruise in ‘Top Gun’ and that means girls that look like Kelly McGillis will want to bang you! All day today, Pat’s Patch Patch at the Seminole Swap Swamp is offering a free patch of your choice with the purchase of any three. Pat will even sew them on for you if your mom won’t do it because she’s too old to sew or she’s sickened by your worthless existence or any other reason.
If somebody sees through you, and they will, try to get out of it by saying it’s no different than wearing a jacket with a bunch of band patches on it. But then you’re not trying to fool anybody into thinking you’re in Fallout Boy, are you? Well, give it a shot.

Once you’ve got your lewk squared away, non-soldier, it’s time to chow down. Head on over to the Golden Corral on Hillsborough Avenue, just west of the airport. It’s been closed since the pandemic started, but a friend of mind hit a possum with his car on Hillsborough the other day and he saw it crawl over there to die. If it’s sill there, you can eat that. Tip: Bring your own hot sauce! Also, don’t go to any Golden Corral locations that are open. They’re going to be feeding actual veterans and your presence will not be warmly received. Of course, you can always…

There are comedy open mics tonight in Lakeland, Odessa and St. Pete and you can get in to any and all of those to watch live comedic entertainment for free! This offer is open to everyone, but they probably can’t keep you out legally, so there you go, I guess. Keep in mind that there are local comedians who are actual veterans and they might be there, which brings us to the last freebie you can get today…

Not a whooping or a whipping but a whoopin’. In case you don’t know, that’s different (ie: worse… much, much worse). And if you still don’t know, wear your little patch-covered jacket and talk shit about your imaginary heroic exploits around the wrong people (ie: anybody who’s ever actually served) and find out.

Hey, maybe if you’re lucky, the whole experience will give you PTSD!

← Quiz: How cancel-able are you?Jon Gruden to Fight ThunderBug on Jake Paul Undercard →