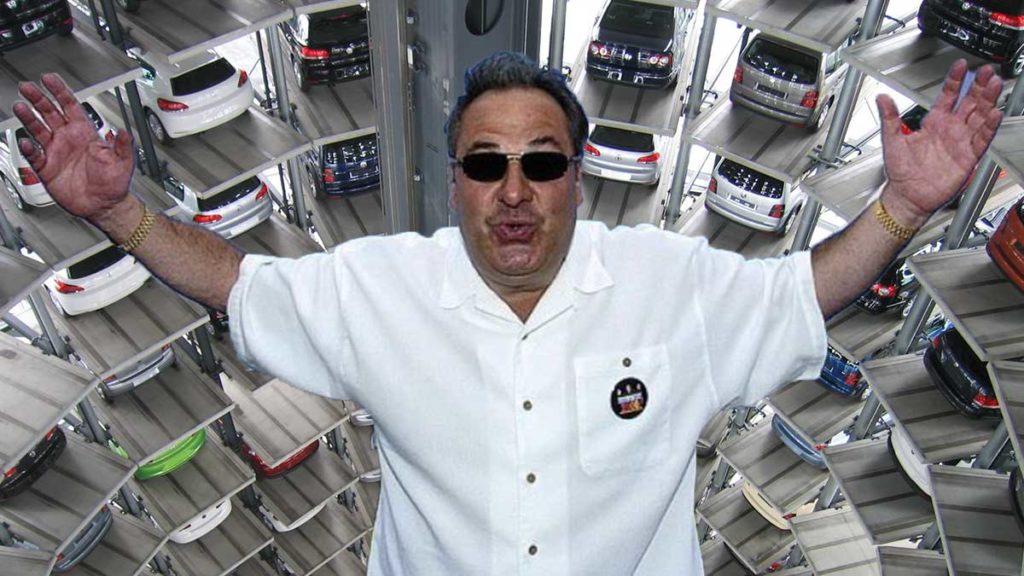 “I don’t know what he’s talking about,” says Denise Flergstrad of Dunedin. “I understand advertising is supposed to be a call to action; they want you to buy something. But the only thing those ads make me want to do is drive into oncoming traffic. I’m already stressed, navigating US-19 to work. I don’t need all that yelling on top of that!”

The ads, which have been airing in the Bay Area for a few years now, are not always unintelligible but are always loud and almost never make much sense. Brian Hoodspah of Brandon says, “Every ad is him yelling and sometimes there are other people, various men and women, talking in the background.” He went on to say, “Sometimes they don’t even mention cars. They talk about going to steakhouses a lot. Am I supposed to buy a car or eat steak? All I know is I can feel my grip on the steering wheel getting tighter and tighter as the yelling increases.”

Some people claim to enjoy the screaming car commercials. “I kind of like those ads,” says Robyn Shenstenden of Gulfport. “They’re surreal, like an audio circus on acid. One thing that is consistent is he always says ‘Huuuge’. Everything is or is going to be ‘Huuuge’, even though he doesn’t say what it is. Is it the savings? Is it the dealership? Are the cars themselves really big? He frequently refers to himself as ‘Mr. Huge’. Is he an enormous man like Daredevil’s nemesis Kingpin? There’s no way to tell! Ha ha ha!” She then started weeping uncontrollably.

“Radio is theater of the mind,” says Rollo Fizzerly of Seffner. “Your imagination paints a picture of what these people look like, based on how they sound on the air. This guy, from how he sounds, I can’t help but imagine that he looks like a smaller, pale Jabba The Hut with little pieces of chewed food flying out of his mouth every time he speaks and a constant stream of drool running down all seven of his chins. Also, for some reason, I picture everyone in the ads shackled to devices in a bondage dungeon. That part is on me, though.”

The ads seem to inflict the most emotional stress upon people in cars. “I think Mr. Huge is a very nice man,” says Ethel Merdna of Seminole, who hasn’t owned, driven or even ridden in a car in over 20 years. “I remember just after the last bad hurricane, he pledged to give money to the Hurricane Irma Foundation. First of all, how nice of a tropical storm to set up a foundation to send underprivileged kids to college after it destroys their homes. Secondly, you seem nice. Would you like a butterscotch candy?”

When reached for comment, Mr. Fucillo said “RAARRGH! GYAAAAHH!! BLURGH! HUUUGE!!” Bombarding my face with tiny pieces of what might have been chewed-up noodles or bread.