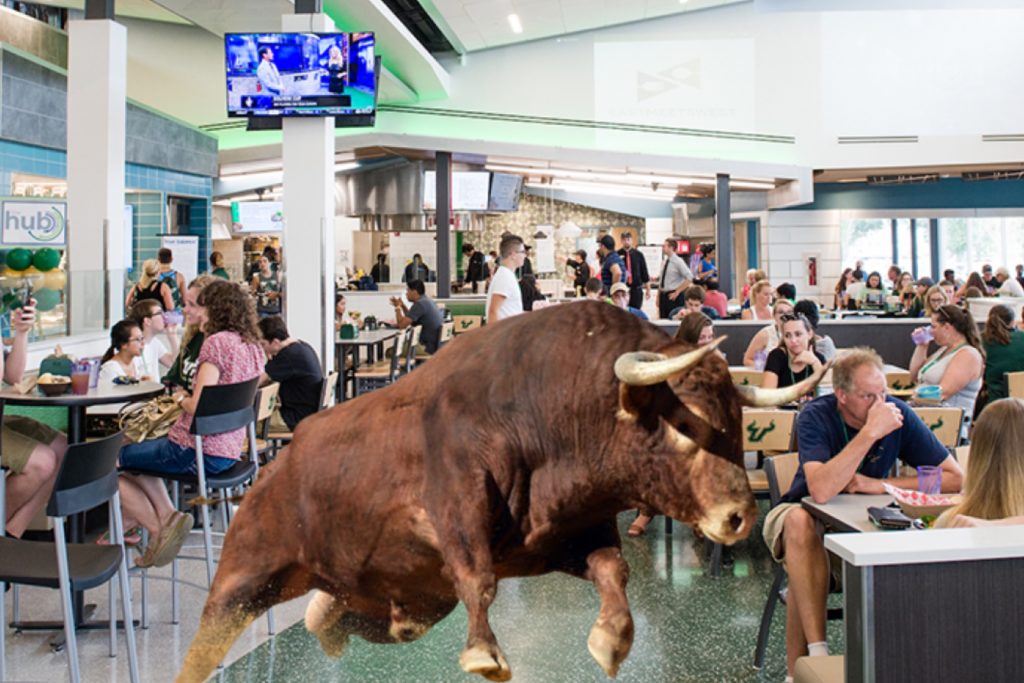 The University of South Florida has lost its accreditation after an accident involving a live bull took place on their campus during school spirit week.

A live 500-pound Cuban bull was released into the Ronald M. Donald cafeteria on Tuesday, which wreaked havoc and caused millions of dollars in damage.

It went on a rampage through the dining hall, as well as going door-to-door in three separate dorm rooms, trashing rooms individually before eventually plagiarizing someone’s capstone essay for creative writing and photocopied numerous students social security numbers and posted them around the Temple Terrace area.

“It was just supposed to be a prank!” Said Dean Edwards, the schools Dean of Academia.

“The teachers never really participate in spirit week, but this year we decided to go all in and invest in a live bull and release it in the cafeteria! We had no idea it was capable of doing all those other things that no animal has ever been capable of doing!”, sobbed Edwards as he was being lead into a police car in handcuffs.

“I just don’t want this to affect the school!”, Edwards said with one last word as the cop car drove off, kicking up dust and pebbles into all of the journalists faces as it took off.

All credits students have earned over the last 50 years will now be null and void and all alumni who are currently working in the world will lose their jobs immediately.

“I just can’t have someone working in my office that has a worthless degree”, Said Chet MacLuster, head of the Yogurtology corporate headquarters.

“I have six USF graduates who work in this office building, and it disgusts me to think that I now have six people working for me who don’t have a real degree. It’s unacceptable! They’ve worked with me for 15 years and have been nothing but absolutely perfect, but that doesn’t change the fact that their expensive piece of paper with cursive writing on it is now null. It’s a shame to see them go, but I will be very happy once they’re gone”, MacLuster said with his arms crossed, nodding throughout every sentence to emphasize the importance of his words.

The bull was shot dead on the campus by two students who happened to be carrying assault rifles.

“Yea, it’s a good thing we had these, or else other people could have been hurt or scammed by that terrible bull”, both students said in unison.

“It’s a shame we have to transfer to a new school now with real credits, but we’re both happy for our time we spent here”, said the two students with a bright side mentality.

USF plans to re-apply for accreditation in the future, but the national school board requires 60 hours of community service from all staff members and a hand-written letter of apology along with a $60,000 fine/registration fee to apply back for their credential status.

The bull’s body has been buried in the official school graveyard alongside some of the most notable alumni including Lee Harvey Oswald and Jack the Ripper.

← Top Date Nights in TampaDr. Strange and the Multiverse of Madness to Feature Drake Bell’s Dragonfly Character from Superhero Movie →