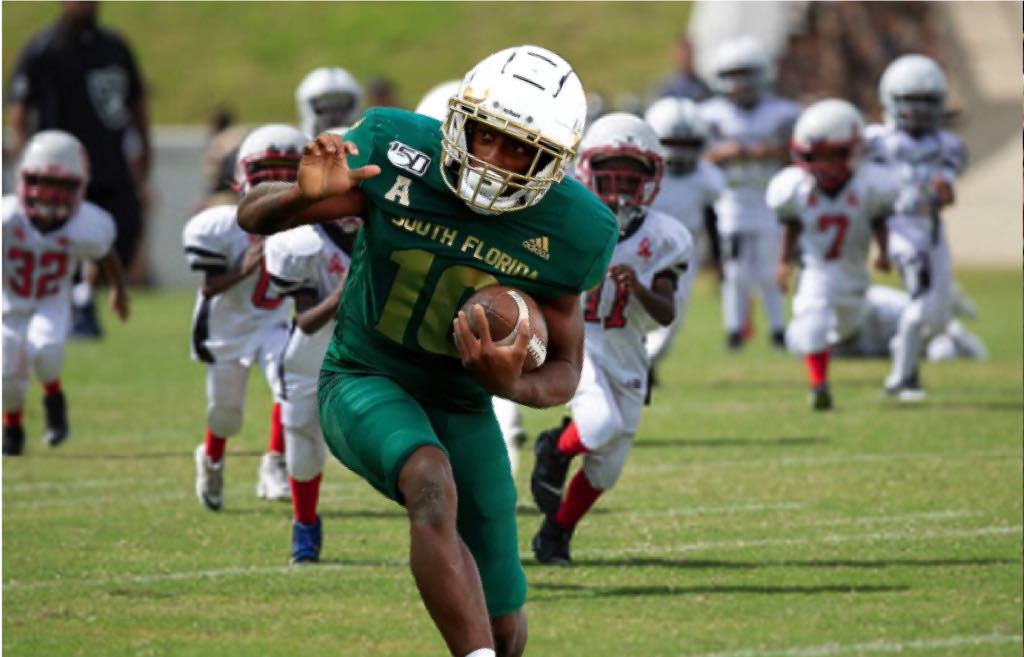 The USF Bulls, who went 1-8 (0-7 in the American Athletic Conference) this year played in a bowl game yesterday to conclude head coach Jeff Scott’s first season at the helm of the program.

“Sure, our record rendered us ineligible for consideration for any recognized, sanctioned holiday bowl games,” said Scott. “But if there’s anything college football taught us in 2020, a year when teams scheduled and cancelled games whenever they felt like it, if they even played at all, it’s that anybody can do whatever they want. So who’s to say we can’t play in a bowl game? Nobody, that’s who. So we made our own bowl game.”

The first annual Boost Mobile Bulls Bowl was held at Skyway Park between the Bulls and the VM Ybor Gladiators 7U team (1-6) of the Tampa Bay Youth Football League (TBYFL), with the Bulls winning 27-24 on a field goal in overtime. “Kids that age can’t kick worth a damn,” said Scott. “We knew that going in and had hoped to exploit that obvious advantage in the game and it worked out. It’s a shame that we missed three field goals and all four extra point attempts during regulation but there’s no quit in this team. Also no start or middle or any indication of a heartbeat at all, really, as evidenced by us getting smoked by 10 or more points in six of our eight consecutive losses this season. But today, we prevailed with a hard-earned victory in the end.”

“We felt like this was a pretty good matchup for us and I’m proud of our guys”, said Gladiators head coach Malcolm Popwell. “Most of them didn’t even cry when the game was over.”

Popwell said he can relate to coach Scott’s desire to have his team play in a postseason bowl game. “These bowl games can be a huge boost to a program trying to establish some legitimacy and being denied that opportunity just because some authority establishes standards and guidelines is hard to swallow. We have a lot in common in that regard.”

“I mean, we’re not actually members of the TBYFL, so the thought was that maybe holding our own against a Division I college team would get us some credibility,” he said. “Unfortunately, we couldn’t get one to play us so it was nice of USF to step in.”

A spokesperson for Boost Mobile said, “We’re proud to be a sponsor of college athletics and everything they represent,” to which coach Scott replied, “Oh, shut up. All they did was hang a banner on the fence and we didn’t bother to have an intern take it down.”