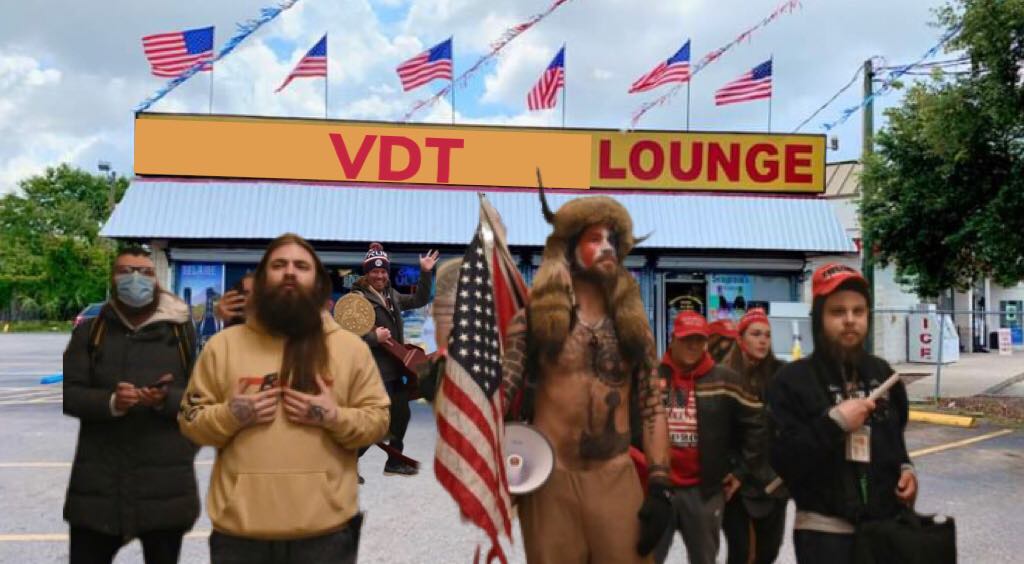 A newly-formed fraternal organization for domestic terrorists has opened a lodge in Tampa.

The Veterans of Domestic Terrorists, or VDT, is a nonprofit service organization created to support white nationalists, insurrectionists, would-be firebrands, provocateurs and identitarians, military gear fetishists, conspiracy theory and junk science proponents and other neo-reactionary, self-styled patriots. The organization’s stated mission is to foster camaraderie among these domestic terrorists and ensure they are recognized and rewarded for their contributions.

“This lodge is a physical manifestation of those ideals”, said organizer Dee Furdick. “It’s a place where guys who have been in the trenches together, fighting for causes they believe in, can kick back, relax, recount their stories of beating cops with American flags, fantasize about what it would be like to have sex with another person, and maybe enjoy a nice organic meal and a foot massage.”

“It’s also a place where the goddamn ice machine hasn’t worked worth a shit since we moved in”, he added over a high-pitched whining noise coming from the lodge’s kitchen.

“You’d better believe I consider myself a veteran”, said Weeb Empster, who said he enjoys hanging out at the lodge a couple of times a week. “The people here are my brothers, man.”

“Most people don’t know what it’s like to be in the heat of battle, smearing your own shit on the wall to make a statement. These guys know exactly what that’s like”, he said, gesturing to what looked like human feces smeared on one of the building’s walls.

“We have big plans for this organization. Huge plans. Tremendous, far-reaching plans! Poorly-considered plans with vague, unattainable goals”, he said. “One thing we’re pretty sure of is that we want to sponsor youth sports and have potluck spaghetti dinners.”

There was a crockpot on the bar, plugged into an outlet on the wall with feces on it.

“But first we gotta scrape together enough money to get a new goddamn ice machine.”