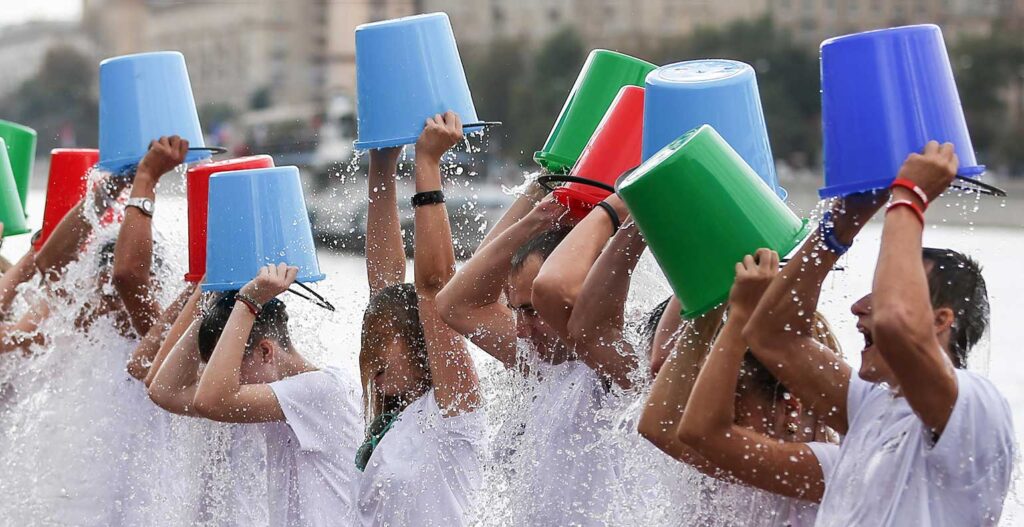 Seven and a half years ago, the nation was swept up in the Ice Bucket Challenge, an activity where people videotaped themselves pouring buckets of ice water over their heads in an effort to cure cancer. Men, women, kids, celebrities, Canadians. Even USF students. We were all united in a common cause.

And guess what? It worked! Today there is no more cancer!

No, today our world is in the grips of another sickness scourge: COVID-19. It’s the only thing that kills people now. Or makes them uncomfortable for a day or two or somewhere in between. Whatever. The point is that it’s the only disease that exists anymore.

So the obvious question is, why aren’t we using the science pioneered by the Ice Bucket Challenge to combat this dreadful disease?

Granted, they’re two different ailments and one remedy may not be applicable to more than one malady. But surely the basic building block of pouring cold liquid on our heads is a fundamental starting point! Come on, science; ADAPT! Take what you learned there and apply it here. Maybe it’s somewhat warmer water poured over our elbows. Maybe it’s not water, but soup. Or soaking our feet in sausage gravy. Or immersing our torsos in Mountain Dew. Who knows? Not me, I’m not a scientist. That’s not my job. My job is to question why you aren’t doing yours! Just like motor oil is motor oil, science is science. Get it together already, scientists! We’ve got TikTok; USE THAT SOMEHOW!

Thankfully, there are heroes out here trying the “WTF” approach to finding a cure. So far their horse de-wormer and bleach-drinking and shining a light up your ass protocols have yet to yield significant results, but at least they’re trying, you lousy layabouts! They don’t even have access to fancy, high-tech, fancy laboratories with Bunsen burners and flasks and whatnots. Nor do they have access to the sophisticated PROVEN EFFECTIVE Ice Bucket Challenge tech. BUT YOU DO, SCIENTISTS! Or should I say “socialists”? Because those two words are similar and one of them is a pejorative and maybe they both should be!

The bottom line is if you aren’t DOING LITERALLY EVERYTHING, including things that are a huge waste of time and maybe even dangerous, to cure this disorder (and that’s the last word for “sickness” in my thesaurus), then you are LITERALLY DOING NOTHING!

We deserve better than that from you because we’re the ones who pay your salaries, just like politicians, cops, firefighters and other elected officials. And don’t you forget it!