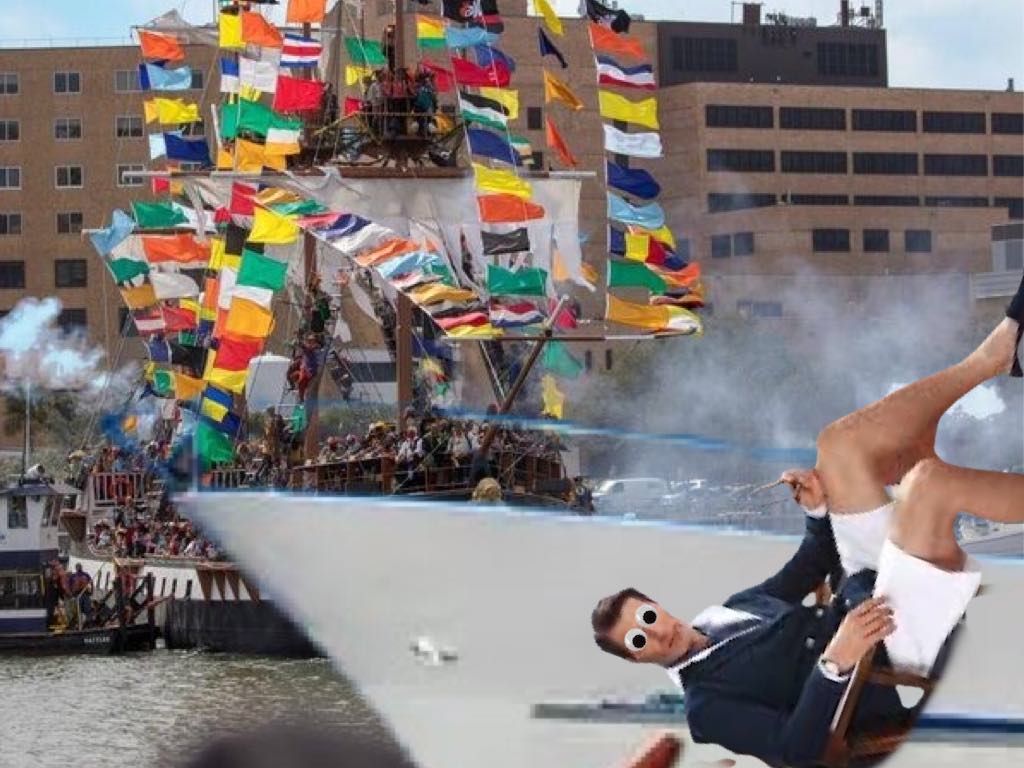 A strong gust of winter wind caused some rich douche probably named Thad or Bryce or something like that to fall off his yacht into the unseasonably cold and murky waters of Tampa Bay yesterday during the annual Gasparilla pirate celebration, to the sheer utter joy of witnesses gathered along Bayshore Blvd. to watch the parade.

“We saw him out there on his boat, with this smarmy sneer on his face. Like he was enjoying how much he wasn’t enjoying himself, because it was all somehow beneath him,” said Amy DeLete of Brandon. “Next thing you know, there’s a sudden gust of wind and Kerplunk!”

“That look on his face as he realized something was going wrong, probably for the first time in his life? Priceless!” said Larry Gitterdunn of Tampa. “Thanks for that, God!”

“You know they issued small craft warnings, advising people not to bring their boats out. But I’m sure he thought, ‘MY craft isn’t small’. Rich people think rules don’t apply to them and too often, they’re right,” said Sam Pright who came over from St. Petersburg. “But sometimes they learn lessons the hard way and you love to see it.”

“I’ll admit, we almost didn’t come because it was so cold. And it really was pretty miserable out there,” said Ann Derson of Clearwater who was there with her husband and their four-year-old daughter, Stephanie. “But when that asshole fell into the water, it was all totally worth it. If they could guarantee that would happen every year, we’d come out no matter what the weather is.”

She asked Stephanie, who was attending for the first time, “Honey, what was your favorite thing about Gasparilla? The pirates? The beads? The food?” to which the child replied, “Definitely the asshole falling into the water!”

“He was all kicked back, wearing his stupid blazer and his stupid white pants and his stupid loafers, sipping champagne,” said Stevie Kreete of Tampa. “His haircut probably costs more than I make in a month and all of it ended up in the drink, where it’s not worth shit!”

“I’m not complaining by any means, but if he’d been wearing a captain’s hat, it would have been the greatest thing I’ve ever seen,” he added. “Actually, now that I think about it, it still is.”

“I hope he swallowed a fair amount of saltwater,” said Henry Brigand of Davis Islands. “If not, I’ve got something he can swallow. Too far? Okay, I’m sorry.”

“With the country so divided over so many things these days, it was downright heartwarming to be a part of something we could all experience and enjoy together,” said Janice Leggings of Temple Terrace, wiping away a tear. “I’m so glad I was there.”

← Are breakfast burritos gay?Brady astral projects himself into Joe Burrow  →