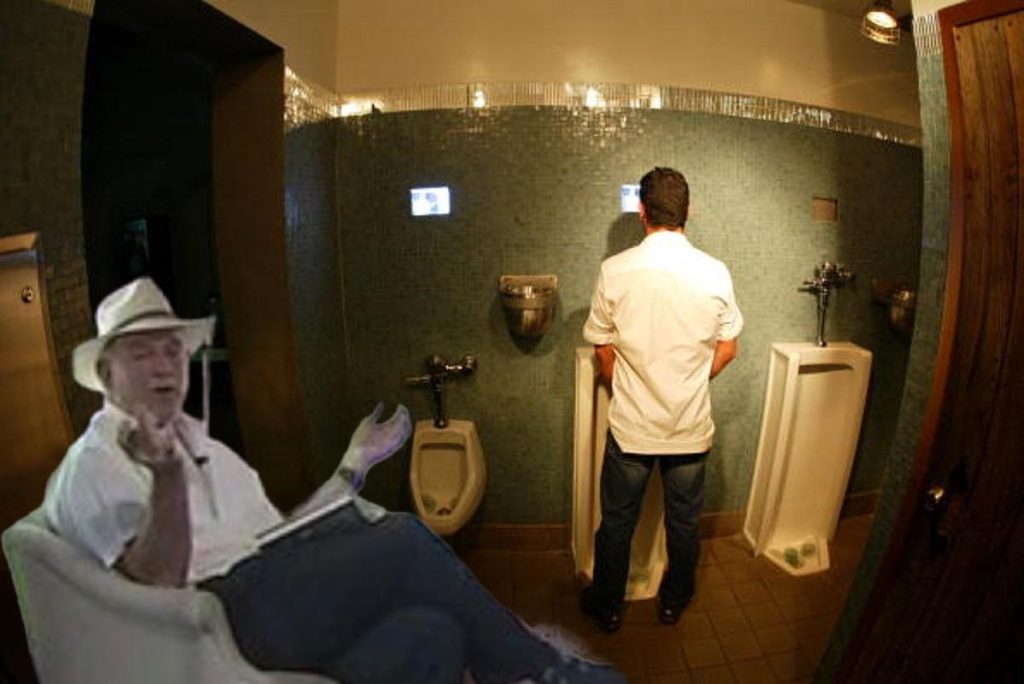 “BUS”, a new night club recently opened in Ybor City is introducing a customer service feature they hope will help them stand out from their competitors.

“Hello. My name is Hector. Hector the Lector,” says an elderly Cuban man, introducing himself to me.

“Hi. So, you’re like a restroom attendant?” I said, to which he took offense.

“No, no I’m not a damn restroom attendant! Handing out towels and breath mints and cologne and shit?” he said. “I’m a lector, in the fashion of those who would read newspapers and novels to laborers in the factories during the glory days of Ybor City as a world-class manufacturer of cigars.”

“Lectors would serve as a source of entertainment for the workers, since there was no radio or TV. As a result, workers would be more productive,” he further explained. “And that’s what I’m here to do; make visitors to the lavatory more productive.”

“You read the news to guys while they use the toilet?” I asked.

“Sure, guys in here doing whatever. Or I’ll just talk to them. ‘Hey buddy, how’s it going? You see that Rays game? How’s your penis?’ Stuff like that.”

“You… you ask them specifically about their penises?” I said, surprised.

“Not just their penises; their balls or whatever. I just try to make them more efficient so they finish up quick and move along.”

“That seems really personal and invasive,” I said. “I’d imagine most men would prefer that you just stick to reading to them.”

“I’ll let you in on a little secret, my friend; I usually forget to bring a newspaper or book, so it’s mostly talking. And yes, the topic of penises comes up frequently. Because I bring it up,” he said winking. “I also do the same thing in the ladies room. Same questions, everything.”

“I’m not sure any of that is necessary,” I said, gesturing to the small TV monitors mounted at eye level above each of the restroom’s urinals.

“Oh, those?” he said laughing. “I installed those myself. The sound doesn’t work and the monitor shows them a live feed of their penis as they make pee-pee! The cameras are mounted inside the urinals. See?”

Then he looked at me and said, “So what you got going on there, buddy. Penis-wise I mean, hmm? You can just use one of the urinals if you don’t want to tell me.”

He replied, “Hey, that’s up to you. We all have choices to make and then we have to live with the consequences. It’s no skin off my assholes, Estúpido.”

I put a dollar in his tip jar, which made him laugh for some reason and I exited the restroom.

That’s when I realized I wasn’t in a night club in Ybor City; I was at the bus station in downtown Tampa. If you haven’t yet, you should check it out some time because the restrooms are top-notch and there’s free parking.