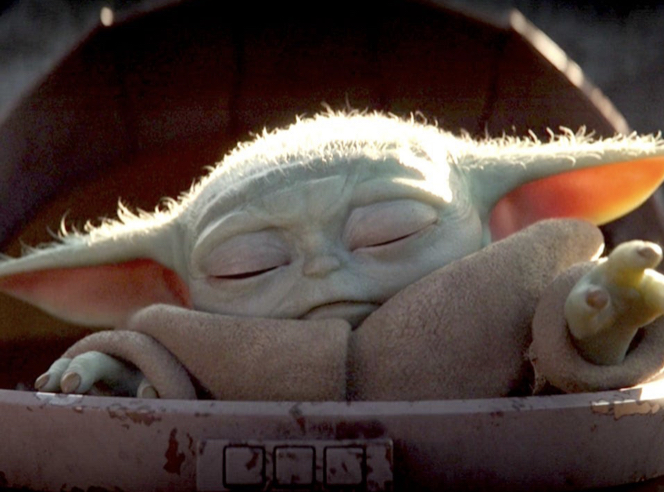 At a press conference held yesterday at the TradeWinds Island Resort in St. Petersburg Beach for the sake of making this story qualify as “local”, Baby Yoda made an appeal for peace, directed primarily at people participating in demonstrations taking place around the world in recent days.

“The Child” is the breakout character on the Disney Plus series “The Mandalorian”. He or it or whatever issued the statement in response to heightened racial tensions and increased levels of anxiety resulting from current events like the murders of Ahmaud Arbery in Georgia and George Floyd in Minnesota among other incidents like the woman with the dog in New York. He’s commonly referred to as “Baby Yoda” because people who aren’t fully fledged Star Wars nerds don’t know or care that the character isn’t Yoda as a kid.

“Home, you must go. Disperse. Please,” The Child said. “Out, you must chill. Work tomorrow, you have to.”

Demonstrator Kyle Langmore said, “It’s not really what I would consider an appropriate message, considering what’s going on right now. Also, Jedi’s are not known for backing down when it comes to fighting injustice and oppression. But it’s Baby Yoda. Man, I love Baby Yoda!” Langmore’s girlfriend Yolanda Yeverson added, “Yodas live to be 900 years and even though Baby Yoda is still a child, he’s 50. So he has the wisdom of a Boomer and the youthful spirit of Gen Z. For a fictional character, he’s surprisingly authentic and credible, not to mention adorable,” Langmore nodded his head and said, “While my conscience tells me that taking the streets to make a statement and try to bring about positive change is the right thing to do, I can’t dismiss the wisdom of Baby Yoda.” “Yeah, I guess we should just go home”, said Yeverson. “It’s not like our generation has the equivalent of an MLK or JFK to look toward for moral guidance and examples of ethical conduct. Why not heed the words of a puppet created and controlled by a global corporate media platform?”

The Child also gave practical reasoning behind his advice during his remarks. “Weak are your skills. No match for the authorities Excessive Force is just The Force.” Baby Yoda concluded by saying, “Demonstrate or demonstrate not. There is no looting.”

Afterward, attractive young people from a variety of ethnic backgrounds sold officially licensed Baby Yoda merchandise from a table set up in the lobby while a would-be bootlegger who had set up a tent across the street was beaten to a pulp.