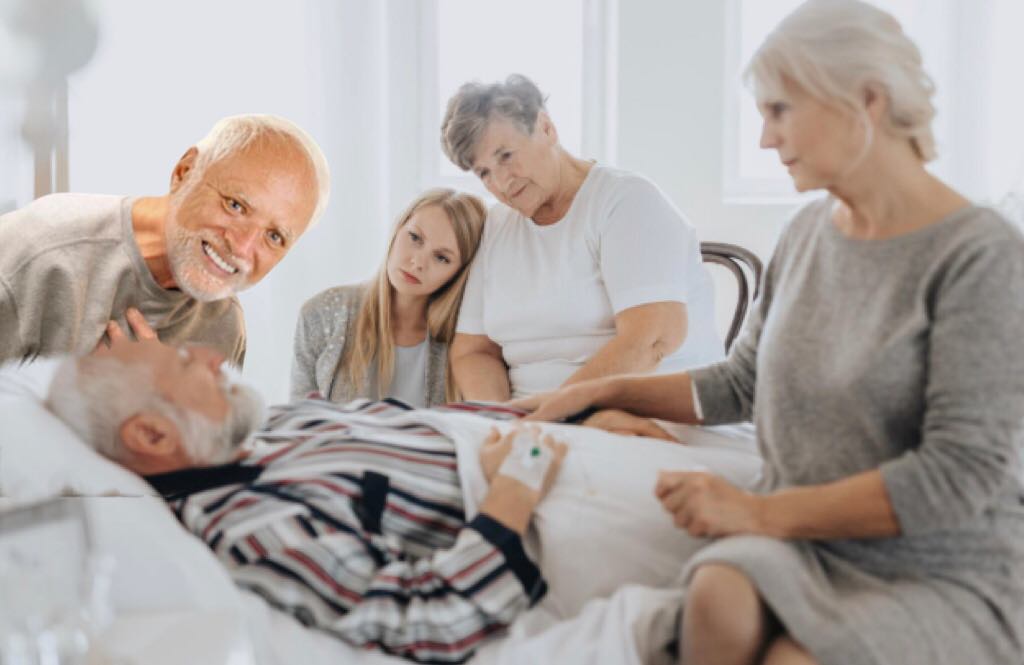 Steve McAndrew of Clearwater passed away recently after a long illness, surrounded by friends and members of his family, and this guy named Jerry.

“It’s tragic and I’m devastated but we’re glad he’s finally at peace”, said McAndrew’s widow Sharon. “If I had one wish, aside from it happening at all, of course, it would be that Jerry hadn’t there at the end.”

“In a way, it was kind of beautiful. All the people daddy loved were there and he got to say good-bye to them personally, which is something he said he wanted to happen once he went to hospice and knew the end was near. Unfortunately, that moment, his last on Earth, was ruined because of fucking Jerry,” McAndrew’s daughter Kayleigh said. “What a way to have to head into the afterlife, with that grinning goon being the last thing you see before closing your eyes forever.”

“Jerry is just some guy that Steve knew. I wouldn’t say they were friends and I’m pretty sure they never worked together. They were acquaintances that would run into each other now and then, and Steve said the interactions were always kind of unpleasant because Jerry is obnoxious. He said he didn’t remember how they ever even met, but Jerry always just seemed to be… around. I think most of us have someone like that in our lives”, said Sharon. “Just kind of lingering on the periphery. That’s who Jerry is; a peripheral lingerer.”

“We got the word from hospice that we should all get there ASAP because daddy was fading. I don’t know how he found out but Jerry showed up and it just didn’t seem right to turn him away. I wish we had ignored that instinct”, said Kayleigh. “He brought his lunch! We’re all struggling to keep it together and Jerry is sitting there eating a tuna fish sandwich.”

One by one, McAndrew spoke to each of his loved ones, sharing memories and saying farewell. He had just finished saying good-bye to Sharon, his wife of 42 years when he took one final deep breath.

Suddenly, Jerry was looming over McAndrew, bread crumbs and tiny flecks of tuna raining down on McAndrew’s face from Jerry’s beard. Jerry said, “Hey pal, hang in there and don’t do anything I wouldn’t do… or WOULD do! Ha ha! Take it sleazy! Smell ya later! Ha ha ha!”

McAndrew gasped, blurted out, “W-what? No! Please, God! Nooooo!” with his dying breath and died.

“Yep, that’s right. My brother, who handled this entire ordeal with such dignity and grace up until the very, very end, went out screaming in denial,” said McAndrew’s sister Linda. “Why was Jerry even there? Fucking asshole.”

“I dunno”, said Jerry, shrugging his shoulders and unwrapping the other half of his tuna fish sandwich that he never got to eat in McAndrew’s hospice room because according to Jerry, “all kind of drama started happening suddenly”.

“But I’d like to think Steve would have been there like that for me if the tables were turned.”

“NO I WOULDNT”, said Steve, from beyond, via a Ouija board