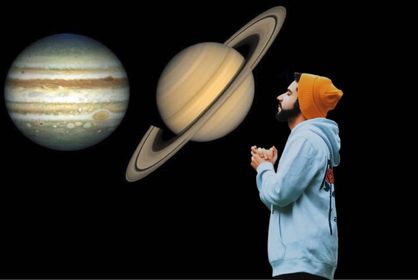 Rory Fulmp of Clearwater is scrambling to put a new cult together prior to the winter solstice on December 21.

“When I found out that the Great Conjunction with Jupiter and Saturn, something that hasn’t happened in over 800 years will take place on the date of the Winter Solstice in this of all years, I knew it required a cult to celebrate it properly”, he said. “It’s like a perfect doomsday suicide stew. All it needs is a figurative bay leaf in the form of a sect of devoted pseudo-religious weirdos.”

On Dec. 21, Jupiter and Saturn, which are actually separated by more than 400 million miles, will appear closer to each other in the night sky than they have for centuries. Seen at the right moment, the two largest planets in our solar system will be separated by roughly a fifth of the diameter of the typical full moon. At this proximity, the planets will appear to touch or even form one large, brilliant star in the sky. Some are referring to this phenomenon as a “Christmas Moon”.

“Call it what you like; this is 2020 and it’s clearly a harbinger of impending doom”, said Fulmp. “You want to associate it with the celebration of the birth of Jesus Christ, our Lord and Saviour, that’s fine. I prefer to see it as a signal that the End of Days is finally upon us. Tomato, tomahto.”

Fulmp realizes that assembling a cult at this point, which he is calling ‘The Sacred Tabernacle For Flying Knights Of The Great Conjunction’, will be a challenge. “First of all, I’m in Clearwater and all the good venues for cult gatherings are already taken. The Boost Mobile store on Drew Street says they might let me use their parking lot when they’re closed. That might work because it’s outdoors where we’ll want to be to witness the two planets exploding just prior to the Earth being snuffed out but I’m going to try to find something better. Also, it’s just hard to get people’s attention this time of year. I’ve been posting flyers around but so far, people seem to think I’m promoting a poetry slam open mic and nobody wants anything to do with that kind of thing. At least people who are seeking donations for the needy stand to benefit from my followers surrendering their worldly goods.”

Aside from a vague idea for a leadership structure, Fulmp does not have a lot of his organization in place. “Obviously, I’ll be the leader”, he said. “I’m charismatic, it’s my idea, I came up with the name and I’m the one who makes the flyers.” He says listings to fill openings for archdukes, bishops and rank followers, to be called Knights or ‘Conjunckies’ can be found at Craigslist.com.