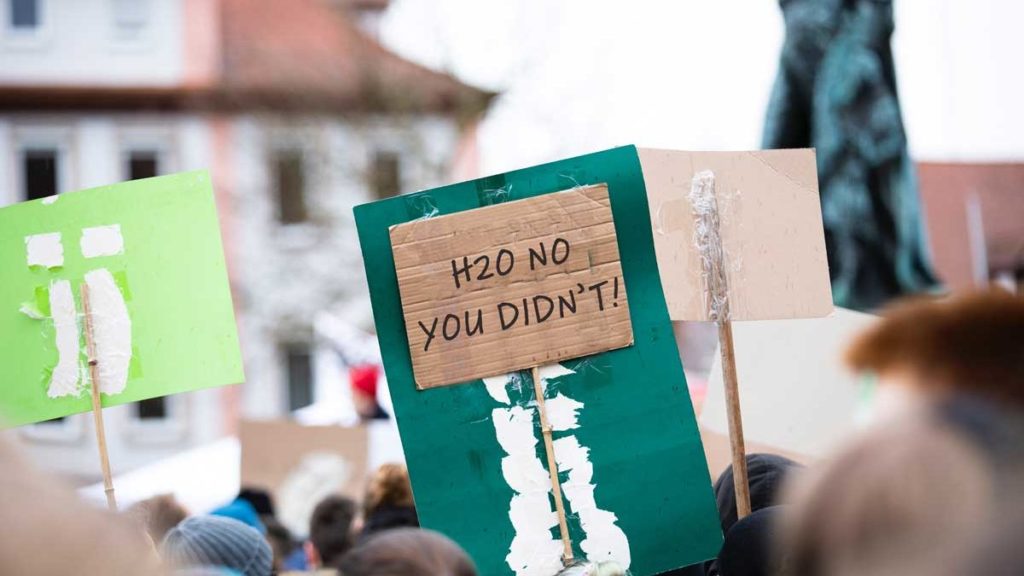 The atmosphere was electrifying this past Friday as thousands of protesters gathered outside the Tallahassee courthouse.

Divided crowds exchanged chants, eagerly awaiting the Florida Supreme Court’s ruling on Larsen vs the State of Florida. The Court was expected to finally reach a ruling, after months of litigation and controversy, on whether or not it was constitutional to serve Florida inmates Dasani bottled water. Only a few feet of barricades and some horse mounted police officers divided the parties and the tension was palpable.

Law enforcement braced themselves as a lone child burst from the courthouse doors and down the steps: “WE DID IT! NO MORE DASANI!” An explosion of cheers erupted as those who opposed the decision hung their heads in defeat. People cried in jubilation, some danced, some sang and chanted, an elderly couple began making love against a street sign. A protester ran up and hugged us, holding a sign that said, “H2O NO YOU DIDN’T!”

The 4-3 vote decided that serving inmates Dasani water was a violation of their 8th amendment rights as it was considered, “Unnecessarily cruel,” regardless of how much money it saved the prisons.

Justice Jorge Labarga was not available for comment but was on the record as saying, “I find it disheartening that this case even reached us. Dasani water is hella gross.”

The majority opinion was written by Justice Ricky Polston, and opined that cases like these determine, “The moral fiber of our great system,” in that while it is often easy to, “Cast out an undesirable portion of our population, they are still citizens of the United States and must be treated as such.”

The dissenting opinion was penned by Justice Robert Luck. Luck was in agreement with the court that Dasani was likely not fit for human consumption but was concerned about the precedent it would set. “This week, it’s Dasani. Next week, it’s LaCroix. We have to draw the line somewhere or risk letting the prisoners run the prison.”

Luck’s decision was heavily criticized though as an anonymous citizen had cell phone video footage of Luck getting a Dasani water bottle from a vending machine, emptying it out into the trash and then rinsing it in a water fountain before refilling it and pouring some out for his dog to drink during a jog, earlier this month.

The team of prosecuting lawyers could not be reached but an ACLU rep was available for interview with Tampa News Force. With such a monumental victory, we asked what was next.

“Smart water! That shit is just Dasani with better branding so it can be marketed to people with disposable income. Everybody knows that’s the ‘Smart’ part. Its days are numbered!” Said the ACLU rep over the sounds of champagne bottles popping open and joyous cheers. It is worth mentioning that Florida is one of 30 states that does still deem the death penalty constitutional in some cases.

We reached out to Dasani’s marketing team, given the decision that they are now literally worse than death, but they were unwilling to respond.