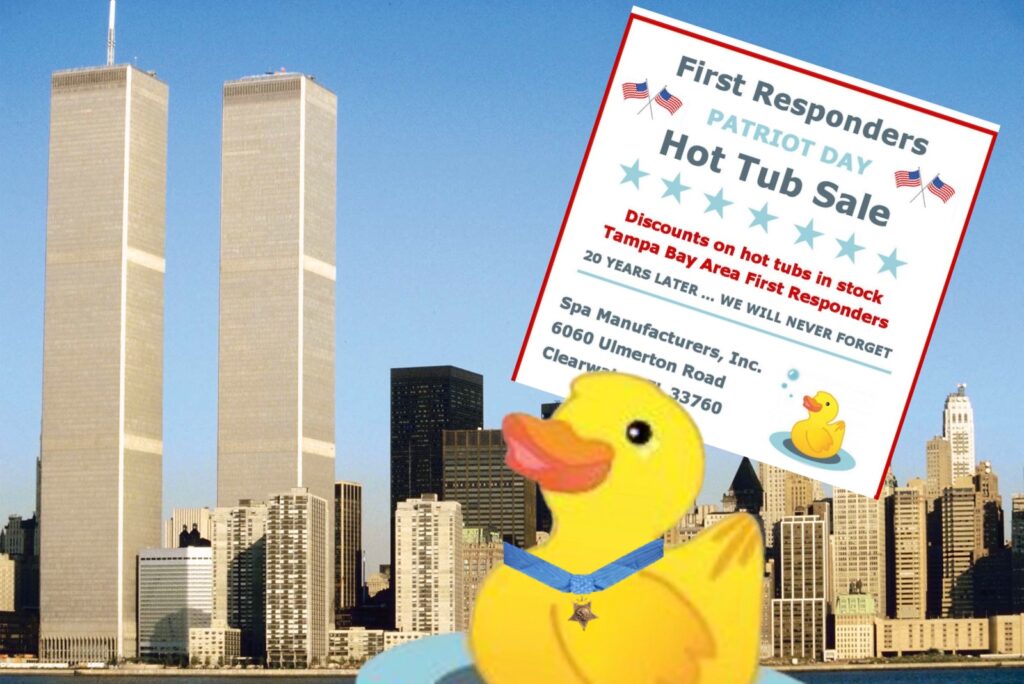 Spa Manufacturers, Inc., a company that makes and sells hot tubs and swim spas in Clearwater is commemorating the solemn occasion of remembering the four coordinated terrorist attacks carried out by al-Qaeda, an Islamist extremist group, that occurred on the morning of September 11, 2001, which killed 2,977 people, including 412 emergency workers, with a special First Responders Patriots Day Hot Tub Sale.

“When it comes to 9/11, we hope and pray that such a horrible tragedy never, ever happens again… although it is a shame that we only have this sale once a year”, said sales manager Barton Burton, a person we made up for the sake of this article who absolutely does not exist and definitely doesn’t work for this company or speak on their behalf in real life because this is satire and protected under the First Amendment to the United States Constitution, whose primary principle supports the freedom of an individual or a community to articulate their opinions and ideas without fear of retaliation, censorship, or legal sanction.

“Yeah, I know that sounds like it could be a real person’s name, and maybe it is somewhere, where silly names are treated with more gravitas than some satire comedy site, but I assure you, I am a 100% made-up person who does not even exist, let alone work for or represent this company”, said Burton.

The exact amount of savings made available via this sale and whether it’s limited strictly to First Responders is unclear from information provided by the company’s web site, but made-up person Burton said it’s “CrAzY!”

“Listen, I see what you’re trying to do”, he said (but not really). “You’re trying to make the point that it’s wildly inappropriate to tie a horrific national incident that cost thousands of lives and continues to impact many people on a deeply personal level, as well as influence global socio-political concerns with some sort of opportunistic cash grab, and we don’t appreciate it.”

“But I would counter your baseless cynicism with the suggestion that not offering significant savings on a hot tub would mean all those people died for nothing and that the terrorists won. As a result of that cowardly and evil attack 20 years ago today, we’ve been denied the chance to help nearly 3,000 people to get their soak on and THAT’S the real tragedy!”

“I’ll tell you what; why don’t you ask Jon Stewart, American humorist and tireless advocate on behalf of 9/11 victims and survivors, if he wants a hot tub, you smart asses”, he pretend-edly added. “And if he does, give him my number. Thanks.”