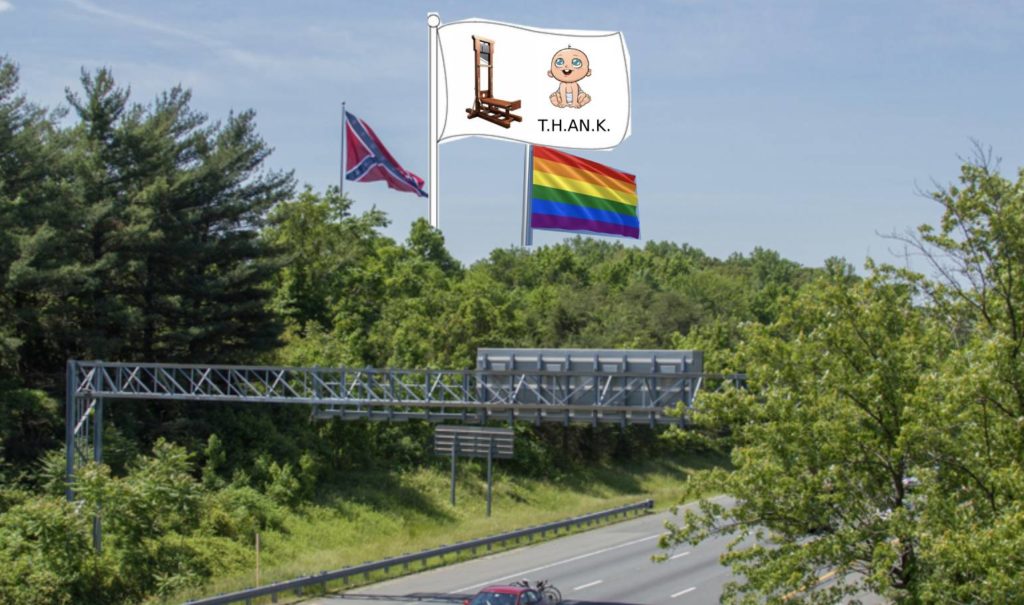 The giant confederate flag that flies on the I-75 interstate highway near Brandon has been drawing attention for years, now it’s being noticed by hate groups who want their flags to get similar attention.

“Them boys are doing fine work, but if people think they’re the only ones involved in hating people, they’re wrong and need to know it. So where’s is OUR huge flag?”, asks Ku Klux Klansmen Name Withheld Because I Don’t Want To Get Fired.

Westboro Baptist Church pastor Goomer Phelps says, “The Klan is a bunch of amateur pussies. We hate EVERYBODY and we misinterpret the teachings of Jesus Christ to do so. If anybody’s enormous banner of intolerance deserves a place of prominence welcoming travelers to the Tampa Bay Area, it’s ours.” When asked if Westboro, based in the Midwest, even has a presence in Tampa Bay, Phelps replied with a creepy grin, “We’re everywhere.”

Marion Lambert, the owner of the small plot of land housing the confederate memorial where the flag is located, does not appreciate these new groups. “I keep telling people our flag represents heritage, not hate. Sure, it’s a heritage rooted in seeing certain so-called people as less than human and being allowed to buy and sell them like farm animals. But if anything, that’s the opposite of hate. Because I love it!”, says Lambert.

Even fringe organizations want in on the action. T.H.A.N.K., which stands for Take Healthcare Away From Needy Kids filed a petition with Hillsborough County for the erection of a 40’ by 60’ flag that depicts a baby in a guillotine. “It’s even bigger than Lambert’s flag, because all poor children deserve to be denied healthcare, not just the black ones”, says T.H.A.N.K. spokesman Benjamin Skinworthy.

Hillsborough County Department of Flag Erections secretary Doug Wilmer says there are steps and criteria that have to be followed in order to post up an obnoxious cloth eyesore near the highway. “We don’t just let anybody stick a flag out there. You’ve got to have an established pattern of bigotry. How is it going to look if we let some fly-by-night organization that hates Jews or whatever be represented that doesn’t actually get involved in the community? We have standards.”

Another group, Tampa Pride Inc has also filed a petition for recognition as a hate group in order to be eligible to fly a rainbow flag that would be even bigger. “We’re actually the opposite of a hate group, we advocate human rights for LGBTQ people”, says spokesperson Linda Hinderhousen. “But at this point, it’s like we have to do whatever it takes to counteract these morons. If that means identifying as a hate group for the sake of bureaucratic paperwork, so be it. ”