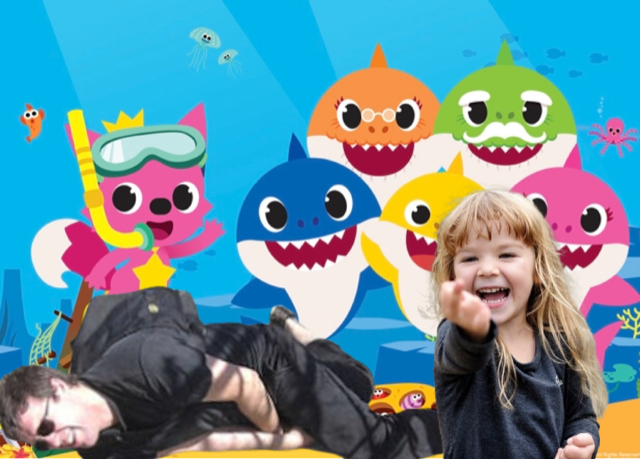 The video for the children’s song “Baby Shark”, recorded by South Korean company Pinkfong, has become the most viewed video ever on YouTube.

At 7.04 billion views, it edges past a video of Tampa’s Randy Despacito being hit in the groin with a whiffle ball bat by his then 4-year-old daughter Marcy, recorded in 2007.

“That’s kind of oversimplifying it,” said Despacito. “Sure, the focal point is Marcy nailing my sack with that bat, but that’s only 11 seconds of the video which is over four minutes long.”

A majority of the video features repetitive views of the incident shown forward and in reverse, slowed down and sped up with a variety of filters and special effects, like stutter cuts. “We also added things to the soundtrack like two coconuts colliding, a slide whistle, a sad trombone and the Benny Hill theme (‘Yakety Sax’).”

Aficionados of testicular mishaps documented on home video consider the video a masterpiece.

“Sure there have been technical advances in terms of documenting scrotal mayhem since ‘Tampa Dad…’ came out, but it has all the elements you look for in a video of a child hitting her father in the balls”, says USF film scholar Chip Dingsler. “It really is the ‘Citizen Kane’ of unintentional genital mayhem comedy.”

Despacito has tried to recreate the successful formula but has never seen any of his subsequent videos reach the same level of success as his debut effort.

“We’ve tried tennis racquets, pool cues, playground equipment. It’s just not the same,” he said. “Also, Marcy is older and a little more aware of what she’s doing. When she hits me in the ‘nads now, there’s a little bit more malicious intent and less childish innocence and glee behind it. Like any teenager, you give her a chance to hurt her parents, she’s gonna take it and she’s gonna mean it. I guess you really can’t get lightning to strike twice, especially when it comes to striking my bits.”

“It would appear that Randy and Marcy are one-hit wonders”, says Dingsler. “But what a hit it was!”

As far as how he feels about ‘Baby Shark’, Despacito said he isn’t bitter about a children’s song featuring a family of sharks claiming the crown of most popular after all these years. “Hey, we had a great run. But the people have spoken; they now prefer ‘doo-doo-doo-du-du-du-du-du-du’ to, ‘Doh! I think I’m dying!’ No hard feelings. Not as much anymore, at least.”