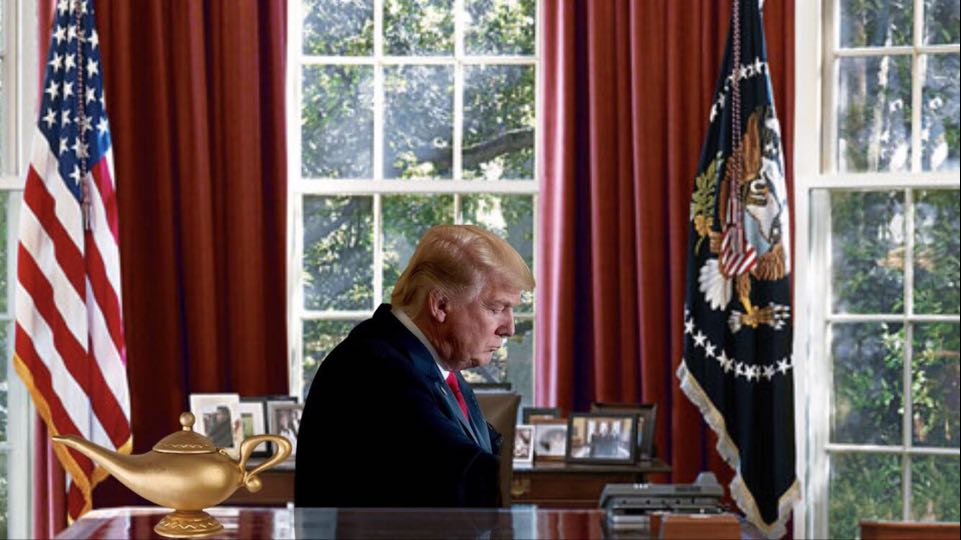 It seems impossible that Donald Trump has stayed president for so long after dozens of scandals, untruthful claims, and an impeachment. This is partially due to wishes he was granted from a genie he stumbled upon a little over four years ago.

The future president was golfing at Tampa Palms Golf & Country Club when his ball hit an unknown object. All the sudden, a genie came flying out of the object, which was discovered to be an ancient lamp. Before the genie could speak, Trump interjected—

“Alright so who are you? So what is this a genie lamp? You know what I don’t have to ask, I’ve seen this before hundreds of times. So how does this work do I get 3 wishes?” Trump inquired.

“Ah I see you are a very wealthy man” observed the genie. “What else could you possibly desire? Nonetheless, you shall receive 3 wishes!”

“First of all, I want you to go back into your little oil pot or whatever because you’re not a legal citizen of this country, but first I want you to do your job and give me my wishes. You think you can handle that? Okay, second thing I want is no jail time. No matter what crimes I do in the next few years— not that I’m doing them!— I can’t go to jail. Then I want to be president of the United States. And I want every single thing I say to become true. Anything I say is true OK. Oh and I also want invincibility, you got that?”

“Sir you are only allotted 3 wishes. I will grant you the next presidency of the United States. However, any statement you utter will not become true simply because you state it. And I cannot make you invincible from disease” the genie explained.

“I’m sorry sir but you’re certainly not the greatest. I granted that wish to Alexander back when he was a boy. Only your first 3 wishes were given” the genie clarified, trying to help the future Leader of the Free World understand the situation.

“Listen, I’ve made more people’s wishes come true this year than you have in 10,000 years. Now get out of my sight or you’re fired!” Trump exclaimed

“Sir you already used your wishes, so I do not work for you any longer.”

Despite the genie’s efforts, Trump continued to stay under the impression that any arrangement of words or sounds he utters will immediately become true no matter how outlandish. Trump declared presidential victory on Wednesday despite insufficient votes. However, his wishes have run out.