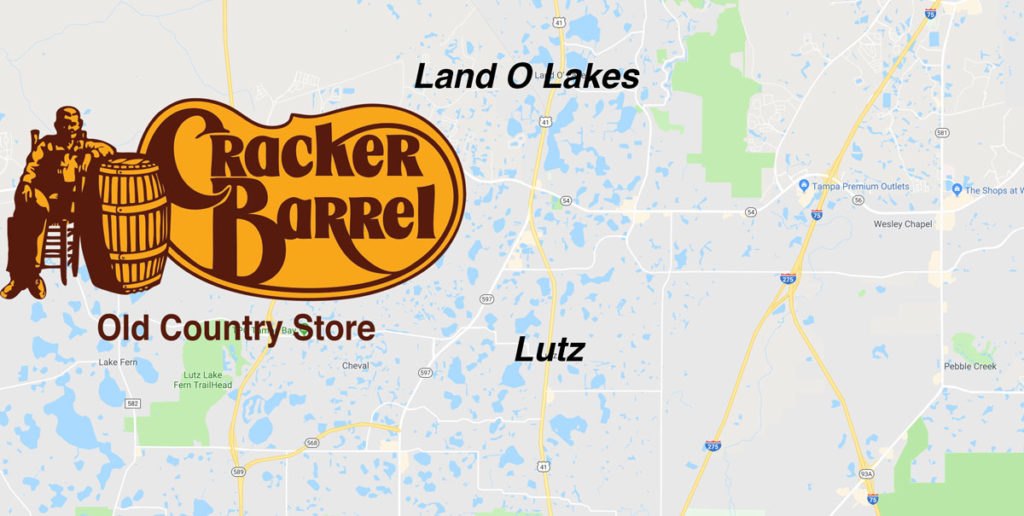 Cracker Barrel recently announced it will build the biggest restaurant and gift shop in its franchise somewhere in Tampa, but they can’t decide between Lutz and Land’O Lakes.

“We think we deserve it more,” says Lutz Mayor Carlos Whetherford. “We technically have the Wal-Mart but when I look it up online it says it’s in Land’O Lakes, it’s about time we got something good and recognized for it.”

As part of the story, I met with representatives from both communities at the Mellow Mushroom near the Tampa Premium Outlets, Whetherford and I looked over the menu as we waited for the Land’O Lakes representative to arrive.

“I didn’t know you were inviting this slimeball,” shouted Land’O Lakes Community Chairman Evan Bollinger from across the restaurant. This was the first time Bollinger and Whetherford had seen each other since they had to separate their wives from a fight during a couples jazzercise class.

Whetherford stood up to properly greet Bollinger, but was met with a punch to the gut.

“Nice to see you too,” gasped Whetherford before falling to the ground.

“You got ten seconds to stand up or else you forfeit your bid and we take the new Cracker Barrel,” said Bollinger with a confident smirk.

I could see Whetherford using all the strength in his body to pull himself together, even grabbing at a servers leg trying to pull himself up while I continued my slow countdown.

“10…9…8…7…” I looked hesitantly at Bollinger in an attempt to stop this scene that we were now causing in the middle of the restaurant, but I was afraid he would turn his rage on me so I continued my countdown. “6…5…4…3…2…”

Whetherford then suddenly was overcome with a sudden burst of energy and performed a kip-up and said, “It’s going to take more than that to keep me down.”

The two then went on a very violent and somewhat choreographed fight before knocking each other out by punching each other in the face at the same time.

An older gentleman wearing an all white suit, white cowboy hat and white leather boots stood up from his seat at the bar and walked over to the two men on the ground while slowly clapping.

“Good job boys, I’m Crackers McBarrel, founder of Cracker Barrel,” he announced. “What I’ve witnessed here today is two men who very dearly care for and respect their community. That is why I have decided to grant you both the gift of the biggest Cracker Barrel at the border of Lutz and Land O’Lakes.”

The entire Mellow Mushroom then erupted in applause while the two community representatives continued laying on the floor passed out.

← Can you chain smoke a bong?St Petersburg Loses Sainthood →