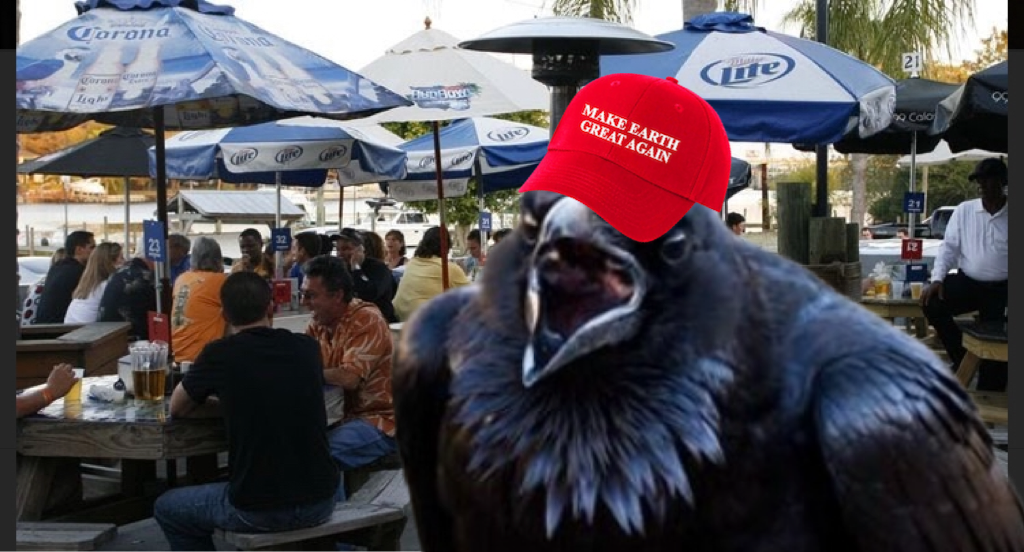 Birds have decided that they will begin taking steps to evolve back into dinosaurs, the ferocious, giant reptilian beasts that dominated the Earth 230 million years ago.

“You mean ‘devolve'”, said a surly raven wearing a ‘Make Earth Great Again’ cap at Rick’s On The River near downtown Tampa. “‘Evolve’ means to develop gradually, especially from a simple to a more complex form. With us, we’ll be going back to what we used to be. You can’t evolve backwards. The fact that you don’t know the difference is further proof that you (people) are too stupid and reckless to be in charge evermore.”

He took a bite out a french fry he found in a garbage can and went on to say, “We were on top of things and doing a fine job. We didn’t have constructs like dishonesty or greed or envy or fear. That was all you guys. Well, there was some fear.” He chuckled to himself and said, “Actually, quite a bit of sheer terror, if I’m being honest.”

He then added, “But we didn’t have government or wars or religion, the air and water was clean and there was plenty to eat because we had each other. To eat, I mean.”

“The only reason we’re not still running this place is because of that comet that struck the planet and devastated the population and now we’re much smaller and less intimidating. In your case, everything is messed up as a direct result of your own thoughtless and selfish actions.”

“I have to hand it to you, you’ve done more sustained damaged over a long period of time with a lot less to work with than the impact of a comet,” he said. “The bottom line is you had a relatively good run, but it’s time for y’all to go.”

I asked if there was a plan on how to implement this devolution and he said, “It’s already begun. It’ll take millions of years, so I probably won’t see the change in my lifetime. But I envision a better life for my grandchildren.” I laughed and pointed out, “Nothing lives for millions of years, you dumb crow. So maybe birds aren’t as smart as you seem to think they are?” He scoffed and said, “this from a member of a species that says ‘down escalator’.” Then he pointed to a fish tacked to a pole above the bar labeled ‘Shrimp’ and said, “Do you think a bird put that there?”

“There is evidence literally everywhere of how stupid humans are.” He then pulled an onion ring out of the trash and said, “Some of you starve to death every single day but you throw away huge quantities of perfectly edible food. How many examples of your dumbness do I have to cite?”

I said, “Wow, you sure are one Angry Bird,” and he just stared at me and shook his head sadly.

Before he flew off, he said, “We’re bringing T-Rexes and Raptors and Pterodactyls and all the others back. You bitches can stick around and see what happens if you want to, but we’ll all find out once and for all who tastes like chicken.”