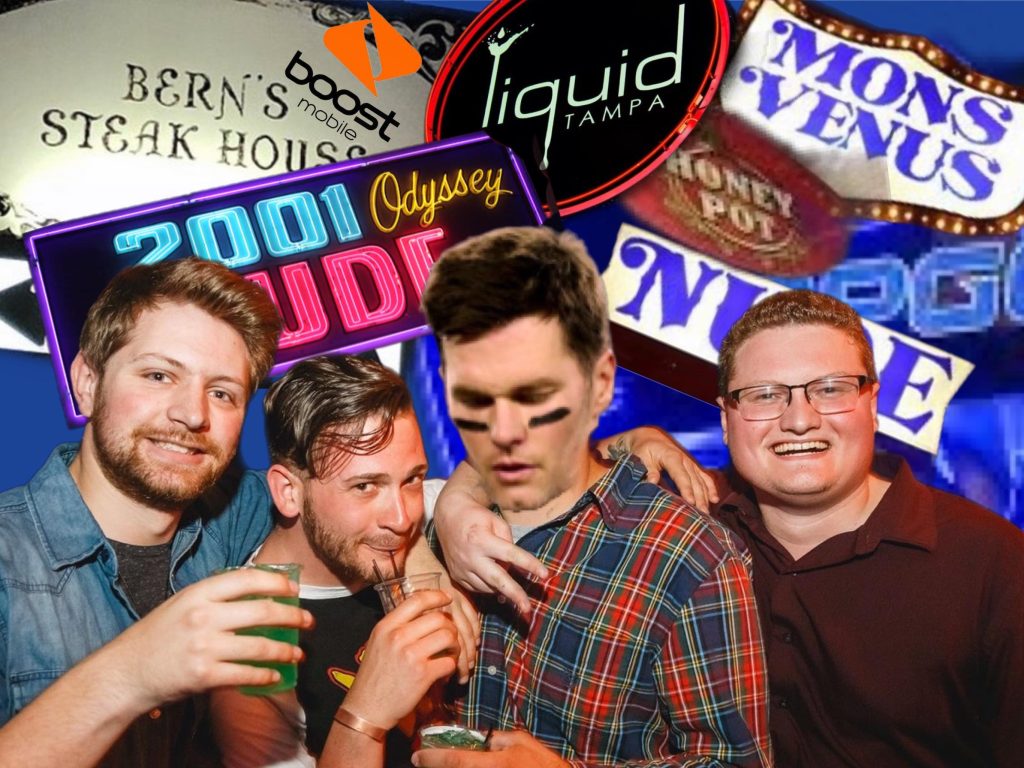 With what has seemed like uncharacteristically erratic behavior from Buccaneers starting quarterback and all-time NFL great Tom Brady recently, widely speculated to stem from conflict within his relationship with his wife Gisele Bündchen, the team decided to intervene and arranged for a “boys night out” to lift Brady’s spirits and re-focus him on the 2022 NFL season.

They enlisted the help of Buccaneers ticket sales associates Chad, Kyle and Chyle, who refer to themselves as “The Crew”.

“Yeah, we hang out,” said one of them, impossible to tell which. “We go to Hooters, Top Golf, whatever. When we were asked to take The G.O.A.T out to get his mind off his troubles, we were like, ‘hell yeah!’”

The evening started out with dinner at Bern’s Steakhouse. From there, the four traveled via rented party bus to various stops in the area, including the GameTime video game arcade in Ybor City, the Seminole Hard Rock Casino and various other nightlife party establishments.

“I gotta say, I don’t think Tom was feeling it,” said one of the bros, a different one from the one we quoted earlier, maybe. “When we were all getting our matching ink at Atomic Tattoos in Ybor, sure, he had his baseball cap on backwards, but you could tell he didn’t really mean it.”

“At one point in the bus, he sighed heavily and said, ‘I wish Gronk was here’ and we all thought, ‘Fuck! We should have brought Gronk!’ but it was too late by then. Oh well.”

The ersatz party entourage eventually ended up at the world famous Mons Venus gentleman’s club, because of course it did, where Brady continued to sulk.

One of The Crew finally asked him, “Tom, what’s wrong? You’ve barely touched your stripper’s ass. Aren’t you having any fun at all?”

Brady replied, “Yeah, yeah. Sure I am. This is great. Lots of fun. It’s just that it would be even more fun if Gisele was here,” and started sobbing.

One of the bros tried to console him by putting his arm around his shoulder and saying, “Oh, come on man! Don’t worry about that bi–,” to which Brady responded by punching him in the face and storming out of the club.

“We don’t know where he went. He didn’t get back on the party bus, though. He just kind of disappeared into the night, like Batman or Prince,” said another one of the bros. “We would have looked for him but we’d each paid a $25 cover and we’d only been there for like two hours.”

The next night in Dallas, Brady completed 18 of 27 passes for 212 yards with a touchdown pass to Mike Evans in a 19-3 win over the Cowboys.

“Mission: accomplished,” yelled Chad, Kyle and Chyle, one of whom had a black eye, in unison while exchanging high fives.