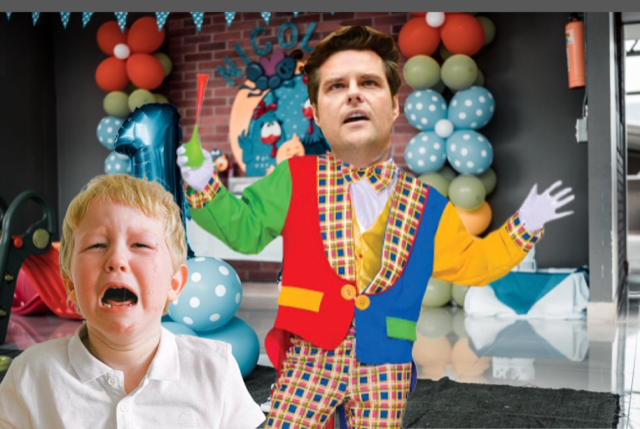 Mark Broberg, who works as a birthday clown for-hire under the name Sparkles Sunshine, ruined the 6th birthday party of Erik Cramer of Largo by showing up as U.S. representative for Florida’s 1st congressional district Matt Gaetz.

“Totally my fault. I feel terrible and I’ve already given the Cramers a full refund and an apology”, says Broberg. “It was an experiment and it didn’t work. I’ll know better going forward and won’t make that mistake again.”

Gaetz recently made news by calling for a criminal investigation of multi-billionaire Mike Bloomberg who paid off $20 million in debt for more than 31,000 convicted felons in Florida so that they can vote in November. Previously, Gaetz has engaged in stunts like threatening trial witnesses via Twitter, improperly spending $28,000 in taxpayer funds to a limited liability company connected to the speech-writing consultant, Darren Beattie, a former White House aide who was ousted after appearing at a convention known as a forum for racist and white supremacist views, mocking a constituent who died from COVID-19 by wearing a gas mask during a congressional vote and introducing a Cuban immigrant teenager as his adopted son in order to not appear racist.

When asked what he was thinking, Broberg explained, “I’ve recently learned some new make-up techniques I’ve been wanting to try. I also know kids these days have more access to information and are also more socially conscious at a younger age than I was growing up. I figured the kids would enjoy the wacky antics of one of the biggest buffoons making headlines in politics today. I thought they’d like topical humor. I guess not.”

He added, “I also forgot to take into account that some kids, and adults for that matter, simply hate clowns. Again, my bad.”

Cramer, who is currently home schooling and enrolled as a first grader at Mildred Helms Elementary School, says his reaction had nothing to do with being afraid of clowns. “Matt Gaetz is only 38-years-old”, he says. “That means he’s liable to be actively involved in government affairs for most of my life, and that terrifies me.”