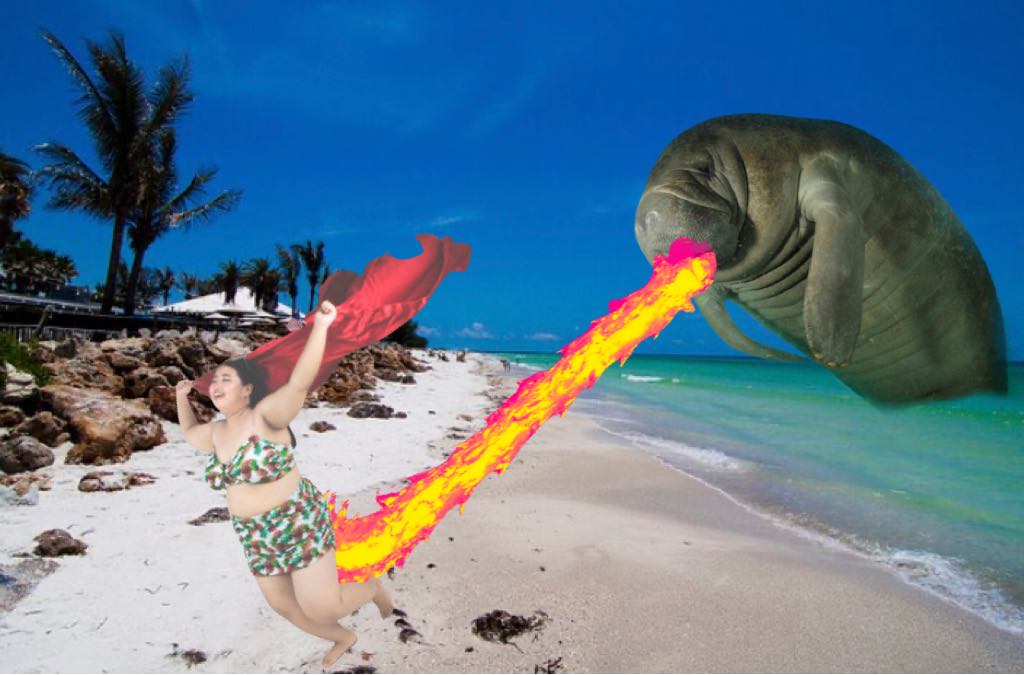 Following the authorization by Florida Department of Environmental Protection officials to release roughly 215 million gallons of wastewater from the Piney Point facility in Manatee County as an emergency response to a leak in a containment pond liner back on March 31, the first negative repercussions are beginning to show up in the form of a 60′ tall laser-breathing manatee terrorizing visitors on Bradenton Beach.

Last week, Snorky incinerated a family of four from St. Louis in town for Mother’s Day weekend. He has also capsized a number of fishing charter boats, drowning at least 34 people to date, as well as eating some jet skis and their riders.

Wastewater released from the former Piney Point fertilizer plant property has made its way to the uplands, back bays, estuaries and marshes along the eastern shores of Tampa Bay, putting a substantial amount of nitrogen in the water.

“We figured that would result in some higher-than-average blooms of red tide and maybe a few more dead fish than usual”, said Baugh. “I’ll admit this is not a development we anticipated. That’s a bad manatee! Oh Snorky! Very naughty!”

“I’ve never seen an ill-tempered, laser-breathing manatee before but I already know that kind of thing is not good for the tourist trade”, said John Horne, owner of the Anna Maria Oyster Bar. “They’d better get it under control and a lot faster and more efficiently than they handled the contaminated phosphate waste water that got us into this in the first place.”

The leak six weeks ago eventually became a breach which led to the evacuation of hundreds of Manatee County residents from their homes and businesses. Emergencies were declared on the local and state levels, with the mobilization of a $200 million effort to close Piney Point once and for all. Officials say that at this point, this particular situation doesn’t qualify as an emergency.

“Uhh, no, I don’t see my close personal friend Ron (Florida Governor DeSantis) giving us another couple hundred million to deal with a big-boned sea cow”, said Baugh with a derisive chuckle.

Instead, the current plan is for scientists at the St. Pete campus of the University of South Florida to work around the clock with researchers from Mote Marine Lab & Aquarium in Sarasota to grow a giant head of lettuce, which will be set adrift in the Gulf of Mexico, with the intent of drawing the hideous mutant beast out into deeper water and away from the coast. “Manatees do love lettuce”, said Dr. Todd Snidjuice of USF. “That’s the entirety of the so-called plan right now.”

“I would politely ask you to refrain from calling Snorky a ‘hideous mutant beast’,”, requested Commissioner Baugh. “At least not when I’m trying to sell these t-shirts, available for $45 exclusively at Vanessa Fine Jewelry, my store at 8131 Lakewood Main St, in Lakewood Ranch.”