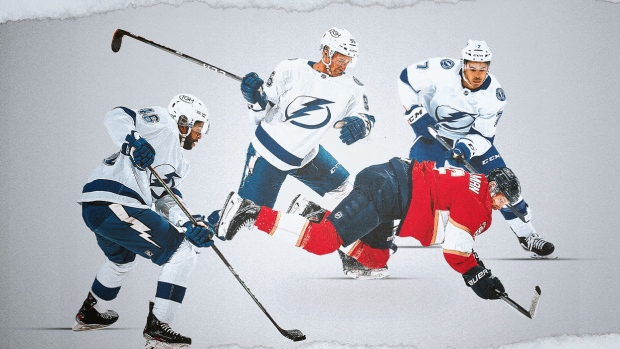 For the first time in the 104-year history of the NHL, a forward line consisting of all black players started a game when the Tampa Bay Lightning sent out Daniel Walcott, Gemel Smith and Mathieu Joseph to begin Monday night’s tilt against the Florida Panthers in Sunrise, a game the Lightning lost 4-0.

“Welp, I guess that settles that; the grand ‘woke’ experiment is nothing but a huge failure”, said Walter Wormworld of Brooksville. “No team has ever won an NHL game when they started an all-black line. Not one game. That’s a .000 ‘winning’ percentage. You don’t have to like it, but stats don’t lie.”

“Listen, if they’re going to focus on this kind of nonsense, it just proves that they don’t care about winning”, he said referencing the defending Stanley Cup Champions, playing their last regular season game before entering the postseason for the fourth year in a row, the seventh time in eight years, an organization that has experienced one losing season since 2011.

The majority of fans seemed to support and celebrate the moment for what it was, in spite of the team’s discouraging loss. But Wormworld’s stupid sentiments seemed to echo those of a handful of cementheads who are apparently tired of black people getting any positive attention for doing anything at all who felt obligated to comment on the matter on Facebook:

“It’s a shame that the first thing we need to bring up is race…again…” – Richard Money
“Get woke go broke……and lose a lot!!!!…..but if the player is talented and keeps hungry no amount of what someone looks like they wont be stopped” – Greg Derenthal
“What BS! A nice 4-0 loss. Good job, Bolts. Let’s be PC.” – Lynne Marquette
“when your team is more concentrated on being woke than competitive” – Jack Cann
“Racism Hypocrisy!!! When will you pandering idiots just stop?!” – Timothy White

Walcott was playing in the first NHL game of his career and Smith rarely dresses for game action. Both were in the lineup Monday because of an injury to Ondřej Palát and Pat Maroon serving a suspension, factors that have contributed to a depleted roster recently.

“They deserve to be here and have worked their tails off,” said Lightning head coach Jon Cooper. “To have them all together, they had a little chemistry. Moving forward in the league, you hope it isn’t a story anymore…”

“Let’s fucking hope that’s the case! I’m sick and tired of race ruining sports”, said Wormworld, who has never watched a hockey game in his 58 years of life.

“…and will be the norm”, continued Cooper. “It was a pretty cool moment for all those guys.”

“Wait, what did he say?!?”, stammered Wormworld, realizing his precious, tiny little world is continuing to shrink before his very eyes and there’s nothing he and his ilk can do about it.