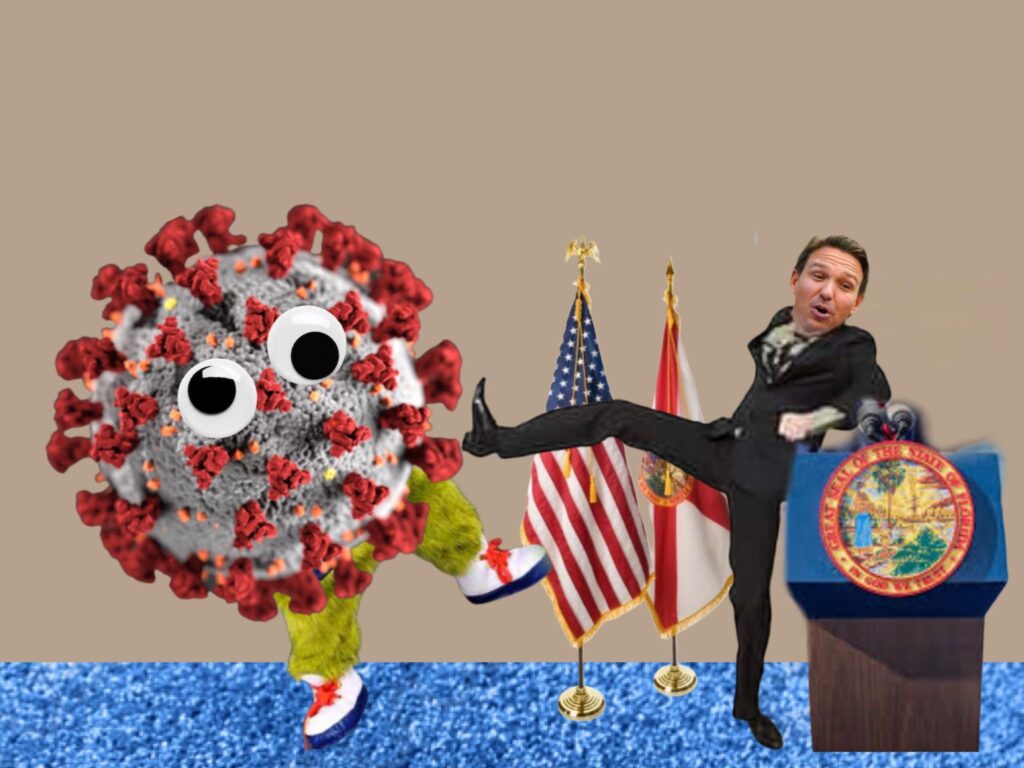 In spite of cases of COVID-19 rising once again in the state of Florida, Governor Ron DeSantis remains defiant of any kind of public safety restrictions or mandates. Yesterday at a press conference in Tampa, he responded directly to criticism that he is not making the situation a top priority.

“It is very important that we say unequivocally ‘no’ to lockdowns, no to school closures, no to restrictions and no to mandates,” DeSantis said. “We’ve been handling things just fine and we’ll keep on handling them. Who’s spreading these rumors anyway, the liberal media and the medical profession? Two of the least trustworthy institutions in the country? Of course that’s who it is.”

“I resent any implication that I am not taking the safety and security of Florida’s citizens seriously”, he said.

At that point, someone wearing a COVID-19 costume with googly eyes in the style of a sports mascot staggered unsteadily onto the stage and lurched around aimlessly. DeSantis said, “Uh-oh! Mean ol’ Mr. Coronavirus is back! Look out everybody, I’ll take care of this!” He then delivered a kick to the costumed character, which produced a humorous squeaking noise and caused it to fall awkwardly to the floor.

The character writhed around on the floor and one of the reporters present said, “I think they’re seriously hurt, Mr. DeSantis”, to which the governor replied, “Damn right! Did you see that kick? PI-YOW!! I crippled his ass!”. Another reporter said, “no, it looks like the person in that costume really is injured.”

Members of the governor’s security detail came over and removed the head of the costume to reveal Beatrice Sanders, a 71-year-old widow from St. Petersburg, who shrieked, “You broke my ribs!! Auugh!”

As medical personnel administered treatment, Ms. Sanders said, “I was at Walgreen’s earlier today to pick up a prescription. Someone from the governor’s office approached me and said that if I wore this costume to this event, they’d let me have my medicine, which I need to live. They said I’d be helping the governor to help fight COVID so I gladly said yes. Mostly because I need my medicine so I don’t die. But this stupid costume doesn’t have any actual eyeholes. They just put it on me and shoved me out on to the stage. I was stumbling around out there completely blind. Nobody told me he was going to kick me. I never knew it was coming.”

“If I’d had a clue that there was a credible threat to my well-being, I would have taken reasonable steps to protect myself from that, including making an informed decision about limiting my exposure to unnecessary risk”, she added. “That would at least be fair, don’t you think?”

← QUIZ: Where should I go to college?Hooker on Nebraska giving out “Stanley Cup jobs” in honor of Lightning →