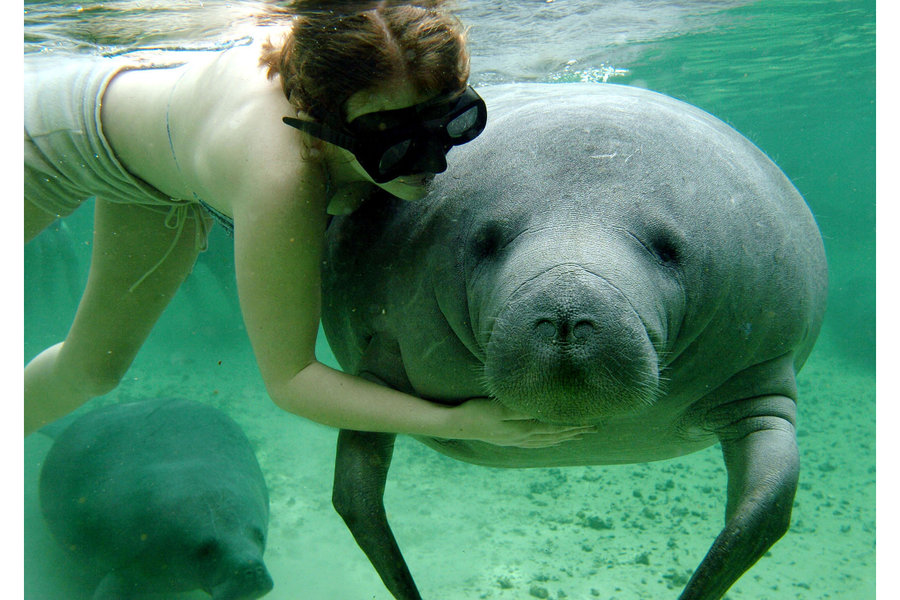 Following an incident in which a Tampa Bay area charter boat captain was witnessed poking a manatee with a fishing pole, the Florida Fish and Wildlife Conservation Commission has re-worded the Florida Manatee Sanctuary Act of 1978 to make it easier to understand.

As written originally, it’s worded as such:  “It is unlawful for any person, at any time, intentionally or negligently, to annoy, molest, harass, or disturb any manatee.” Effective immediately, that will be re-written as “Manatees: Leave them the fuck alone“.

“Apparently, people were having a problem interpreting the ‘legalese’ in the original statement – a couple of those words have more than three syllables – so we thought we’d better just boil it down to the basic message we want to impart”, says Florida Fish and Wildlife Conservation Commission (FWC) spokesperson Pete Gillbreathe. “As the human population grows and becomes even more infested with what I like to call ‘dumbasses’, this kind of over-simplification is probably going to become increasingly necessary.”

Captain David Beede, who operates Shallow Point Charters out of Tampa, is the man accused of the misbehavior in this latest incident. He stated in an interview earlier this week, “There was an aggregate of manatees, and the clients said they want to see them. I said, ‘no problem.’ I turned off the engine and floated in. There was one that had a white spot, and I scraped it with a very weak fishing pole. It’s a trout fishing rod.”

“Now see, there’s the problem,” said Mr. Gillbreathe. “He didn’t leave the manatees the fuck alone. It’s not uncommon for manatees to have barnacles or algae on them. It’s a situation best addressed by leaving them the fuck alone.”

Beede has been reported to the FWC and if convicted of harassment, he could face a maximum punishment of $100,000 and one year in prison. “Well, I can’t say this looks good for him,” says Mr. Gillbreathe. “Because, clearly, and by his own admission, he did not leave the manatees the fuck alone.”

“Ah, okay. I wasn’t aware of that factor. Hmm…”, said Mr. Gillbreathe. “In this particular, special circumstances, and very unique case, he didn’t leave the manatees the fuck alone! See, if he had done that one simple, obvious thing that anybody with even a tiny brain containing an ounce of common sense in their head, especially – ESPECIALLY – a fucking charter boat captain who has been operating for over 20 years in the local area should know, which is LEAVE THE MANATEES THE FUCK ALONE, he wouldn’t have these problems.”

← Win tickets to see the Vipers LIVE with Tampa News Force!We have winners! →