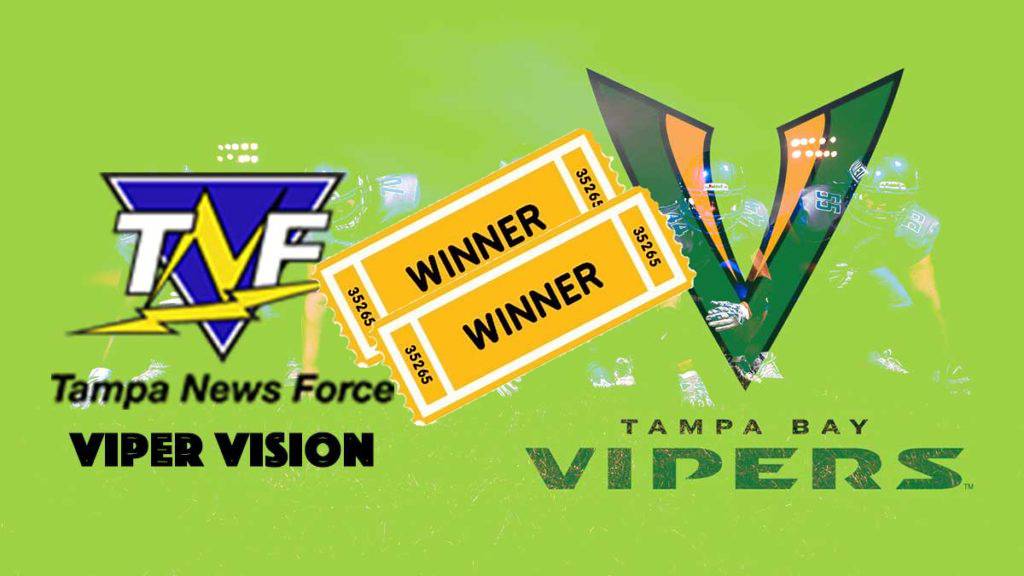 Who wants to go to the game this Sunday night? YOU DO! And here’s your chance!

Tampa News Force has two tickets to the Tampa Bay Vipers game this Sunday against the DC Defenders at Raymond James Stadium and we’re giving them away to YOU (maybe, if you win)! And the best part (well, a part anyway) is you’ll get to sit with actual Tampa News Force members JOHN JACOBS and CLARK BROOKS (see bios below). We might even tailgate. We’ll let you know about that if you win.

It’s probably necessary to mention that this giveaway is 100% legitimate, being as the site is primarily a source of satire, parody, arbitrary and unnecessary humor and random fart jokes. But not this. This is really real.

Here’s how it will work:
1) “Like” us on Facebook and/or follow us on Twitter (doing both doubles your chances of winning)
2) Tag us in a post on Facebook and/or Twitter with the hashtag #TNFWinTix
2a) If you’re already with us on Facebook and Twitter, THANKS! Go ahead and do the post with the hashtag because you’re definitely eligible.
3) Maybe mention in those posts how awesome we are. I mean, it’ll be a random drawing but it can’t hurt, right?
4) We’ll select two random entries at 1:00PM on Friday and announce the winners here at TampaNewsForce.com, on Facebook and Twitter.
5) We’ll get in touch with you and let you know where and when to meet us at Raymond James Stadium Sunday night.
6) Root, root, root for the Vipers!

ABOUT JOHN JACOBS – An original creator of Tampa News Force, John is a stand-up comedian, actor and musician who has starred on MTV’s reality shows “Are You The One?” and “The Challenge”. He’s originally from the Washington DC area so he might root for the Defenders on the DL during the game, so we’ll have to keep an eye on that and check his ass if necessary.

ABOUT CLARK BROOKS – He’s this guy who is not JOSH SANTOS, the other original creator of Tampa News Force. He’s basically a third-wheel who currently holds the title of Supreme Associate Content Editor within the TNF organization. He’s also a comedian.