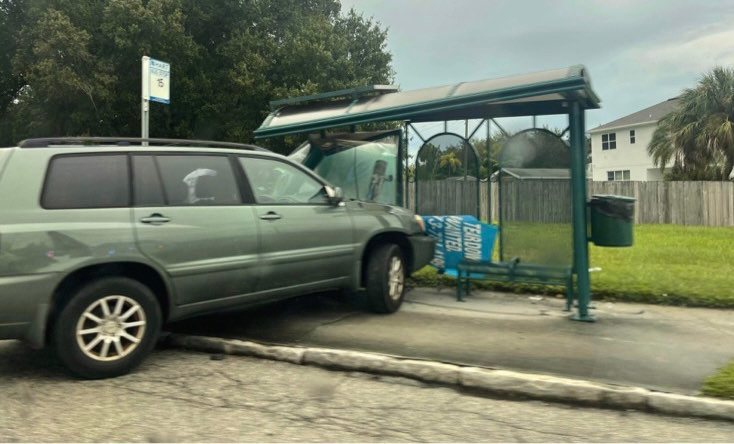 Tampa’s public transit system is getting a facelift thanks to a set of new park and ride stations.

“We want to make it easier for Tampanians to ride the bus,” said Reily Huarto, HART’s Customer Relations Ambassador. “These stations will let customers crash their car right into the bus stop shelter and hop on the bus.”

Much like the bike racks on the front of the bus, parking will be limited to one car per bus stop shelter.

“Buses have always been a first come first serve kind of deal,” said Huarto. “But we’re confident this new system will eliminate cars from the road, which is our ultimate goal.”

In addition to the new bus stop parking stations, The City of Tampa has announced a new car for bus trading program.

“People will now be allowed to trade in their cars for a public bus that they can drive around and make money with,” said Mayor Jane Castor. “It will be like Uber but better.”

Mayor Castor hopes that every car on the road in Tampa will be a bus.

“Tampa will be a model for the future of transportation,” said Castor.  She then jumped into her city bus and started doing some pickups.

I got a ride with her and she was only able to drop me off a couple of miles away from another bus stop. While I was waiting for another bus, a car came up and ran me over.

My legs are going to be amputated soon, but I am very hopeful that the future of transportation in Tampa is headed in the right direction.