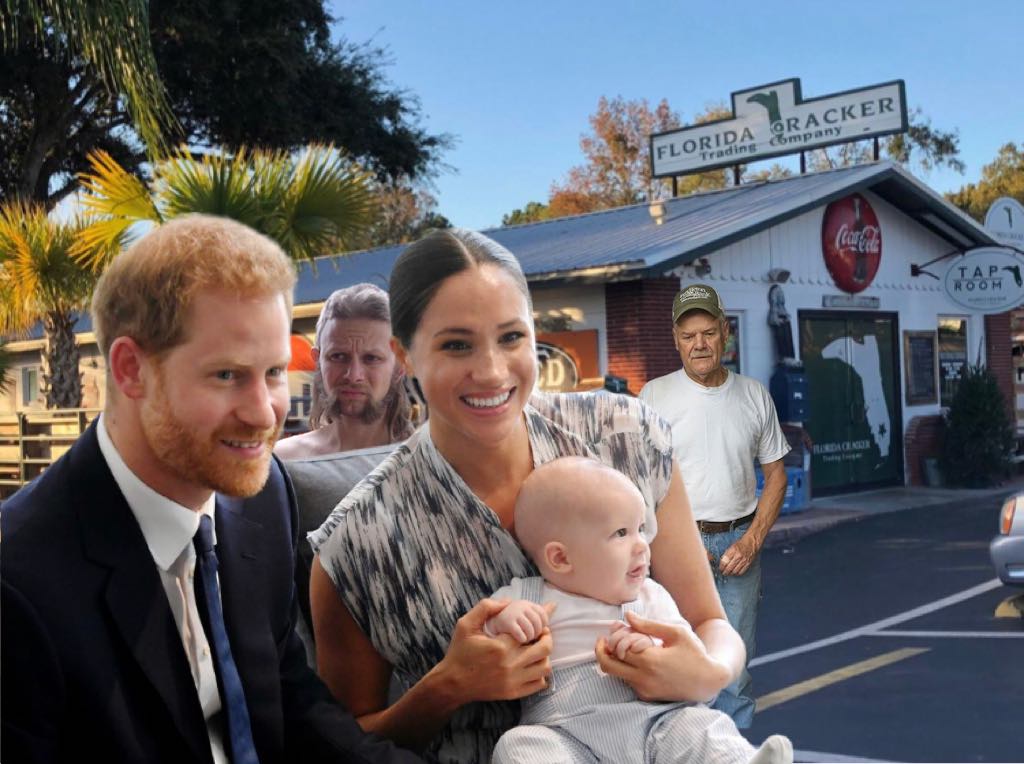 Fresh off their provocative televised interview with Oprah Winfrey, Prince Harry and Meghan Markle have announced plans to move to Brooksville, Florida.

“We’ve been in Los Angeles since leaving the UK but it’s very stilted and artificial”, said Prince Harry. “We need to be in an authentic, genuine environment, so we can raise our son Archie among real people.”

“Oh, we’re real, all right”, said Brooksville resident Delbert Gloonturg. “He wants to see real? Well, you just tell that ginger fancy boy and his n…” At that point, he was interrupted by Brooksville Convention & Visitors Bureau Chairman Russell Twigg, who shoved Gloonturg out of the way, smiled broadly and said, “You tell ’em they’re welcome here, yes sir!”

Prince Harry said he’d been looking for suitable residences and stumbled across some articles about Brooksville by accident. “There were a lot of references to ‘crackers’, which we in England refer to as ‘water biscuits’. I found that to be rather quaint”, he said, chuckling.

“Did he just call us a bunch of homos?!?”, asked another angry resident, Delores Fruitnozzle. “We don’t go in for none of that quaint, queer stuff here and if that Cheeto-headed firemuff and his bl…” before being put into a chokehold by Mr. Twigg, rendering her unable to finish vocalizing her thoughts.

“We can’t wait for Harry and Meghan and baby Archie to get here and sample what we have to offer. Like some of our local delicacies, such as good ol’ down home biscuits and gravy”, Twigg said. “Except I hope Harry understands that our biscuits aren’t cookies like over there in London! Ha ha ha!”

Once it was obvious that Ms. Fruitnozzle had fully passed out, Twigg released her, allowing her limp body to slump to the ground before taking me aside.

“Okay, listen. We have been taking a lot of heat around here for certain racially-based historical misunderstandings, much of it coming from you Tampa News Force people”, he said. “This is a golden opportunity for us to push back on that and redeem our image, okay? I’m new to this job and there’s a lot of pressure on me! I can’t have anybody screw this up… Hey! HEY!! NO! STOP IT!!”

At that point he got distracted and ran off to thwart a group of residents arranging some flammable crosses to spell out “WELCOME TO BROOKSVILLE EUROTRASH RACE TRAITOR” in front of the library.