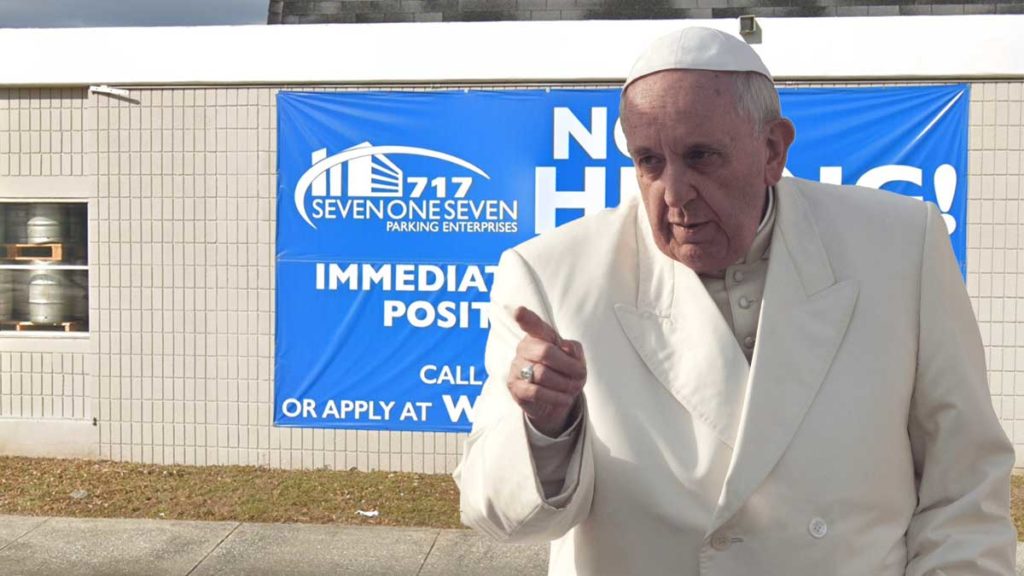 Pope Francis has earned quite a reputation for himself as the forward-thinking, progressive head of the Catholic Church and sovereign of the Vatican. He first made headlines in 2014 with his controversial declaration that homosexuality is not a sin, and the Catholic Church should not oppress people based on sexual orientation the same way they oppress women. But after a recent parking ticket and the conflict that ensued after, the Pope made a Twitter declaration that there is, “No redemption for any rat bastard that works for 717 Parking in Tampa.”

Pope Francis was in Tampa this month for a few days to get an acai bowl at Rico’s Acai, on MacDill. When asked about his visit, he responded that “…it’s totally dope if you haven’t tried it. You can eat it for breakfast, lunch, or even dessert, honestly.” He declined to comment on the conflict, however. The incident occurred at a 717 Parking lot on the corner of Polk and N Franklin. Local passersby claimed they could hear a shouting match between a 717 Parking attendant and a small group of people in the white Fiat, known colloquially as the Popemobile.

“I couldn’t tell who was in the car but it was super fancy so I figured it had to be someone super famous like John Cougar Mellencamp or something,” said a Tampa resident. “I couldn’t hear specifics but I could tell the 717 guy was holding his ground and the other people were angry. Even threw a latte at the guy.”

Another resident was a little closer and claimed they could hear the Pope threatening to wear the 717 Parking attendant’s, “Ass as a hat.”

“I think he meant ‘as a boot’ but he sounded totally wasted so I’m not sure what to make of it,” said the local.

The inflammatory tweet followed Sunday morning mass where he went off on a tirade against 717 Parking for being Godless heathens.

“The gays are cool with us, now. I’ve been clear about that. But these scumbags at 717 Parking? There is no conceivable way into heaven for anyone associated with them. I was seriously only there for an hour and they charged me for the day and I still got a ticket because it was after 9. Nobody calls it a night before 9 unless they’re a total loser. And the ticket they gave me had a convenience fee. What’s convenient about paying a parking ticket? Assholes. All of them. How do they sleep at night?” – Rough translation from Latin, December 15 Vatican City mass

While the Pope refused to comment on the altercation, his social media team said that he was very upset about how the situation unfolded. “He was going to attend the Pokey’s Open Mic on Madison because he’s been working on some new material and we heard good things about that mic. But after such hostile treatment from 717, he wanted to just return to the hotel,” said Pope Francis’s PR manager.

The parking attendant has not been identified but a 717 Parking spokesperson responded to our inquiry, “Look, these attendants are just everyday people doing Satan’s bidding because they need to make a buck and they’re not qualified to do anything else. And respectfully, it’s not fair for anyone to be throwing beverages at our employees, even the Pope.”

Pokey’s open mic is every Wednesday at 9PM on E Madison.

View all posts by Mike Rigo →