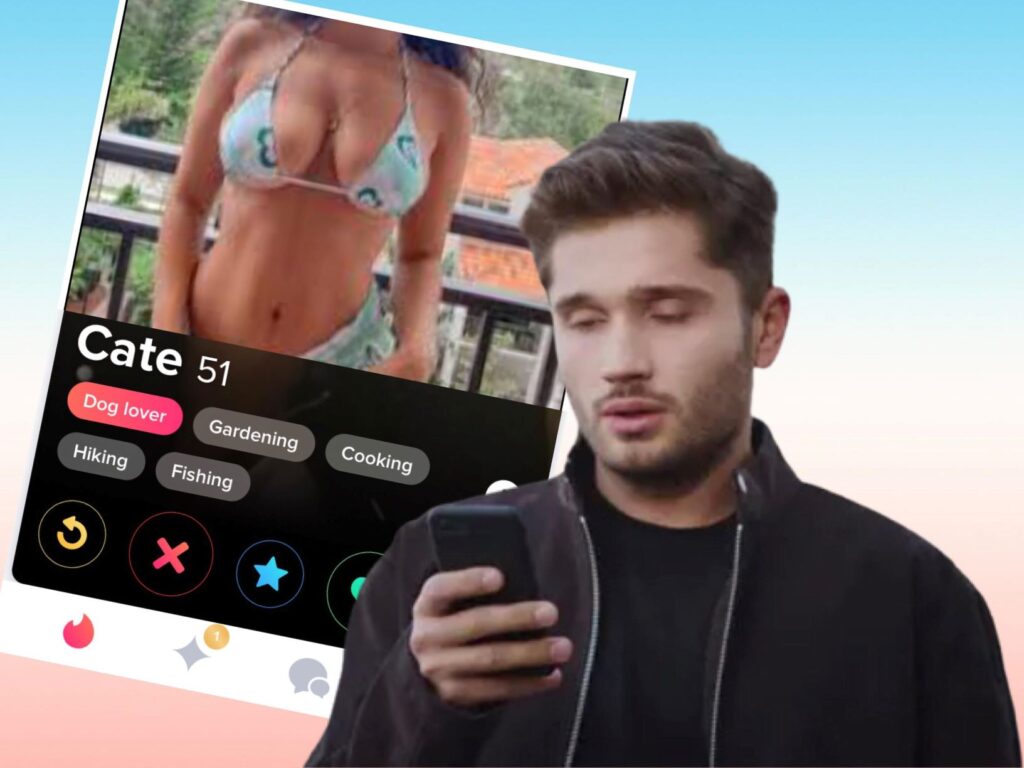 Gregg Glizistky of St. Petersburg feels like he’s been deceived by a woman he matched with on the popular dating app, Tinder.

“All these profiles are basically the same”, he said. “They say, ‘Hi, I like to go out to eat, enjoy live music, working out, watching sports and leisure activities and dogs and art. I went to college and I have a job and lots of interests. I’m unmarried and looking for a real connection with someone who wants more than a hook-up. Blah blah blah.’. So repetitive and boring. Then one day, out of nowhere, I finally see one that’s actually interesting… and it turns out to be bullshit.”

He ‘swiped right’ on the profile (indicating that he liked it and was interested in meeting) of a woman named Cate. Cate’s profile picture was of her bikini-clad torso, with no face or legs visible.

“I thought, ‘well, all right!'”, he said. “Finally, someone interesting! Someone I actually want to get to know. Like, I never do this but I found myself thinking ‘here’s someone I can see spending the rest of my life with’. But I was being played for a fool.”

He exchanged a couple of messages with Cate and they agreed to meet for dinner at the Red Mesa restaurant on 4th Street in St. Pete.

“I’m sitting there waiting for her and she walks in, WALKS IN, on a pair of perfectly normal, full-sized legs”, he said. “Worse, there was a totally functional head with a face and everything on her neck. I got up and stormed out. I’m nobody’s catfish victim!”

“I guess I’m a bad guy for wanting a relationship with a middle-aged woman comprised entirely of nothing but the sex parts? Well, excuse the shit out of me.”

Reached for comment, Cate said, “I used that picture because I’ve been working out and gotten into great shape. I’m proud of myself for that, but he’s mad that I’m not a headless, quadruple amputee? What a creep. I have other pictures on my profile, you know. All he had to do was scroll and he would have known that I have feet and hair and eyes and a mouth.”

“Oh right, I’m on Tinder because I want to look at somebody’s whole photo album”, said Glizitsky. “I suppose you’re going to tell me I should look at more than one page of Google search results. Is she even 51-years-old?”

“Okay, I’m 38. I list myself as older to scare off immature, superficial jerks”, Cate admitted. “Clearly, it doesn’t always work.”