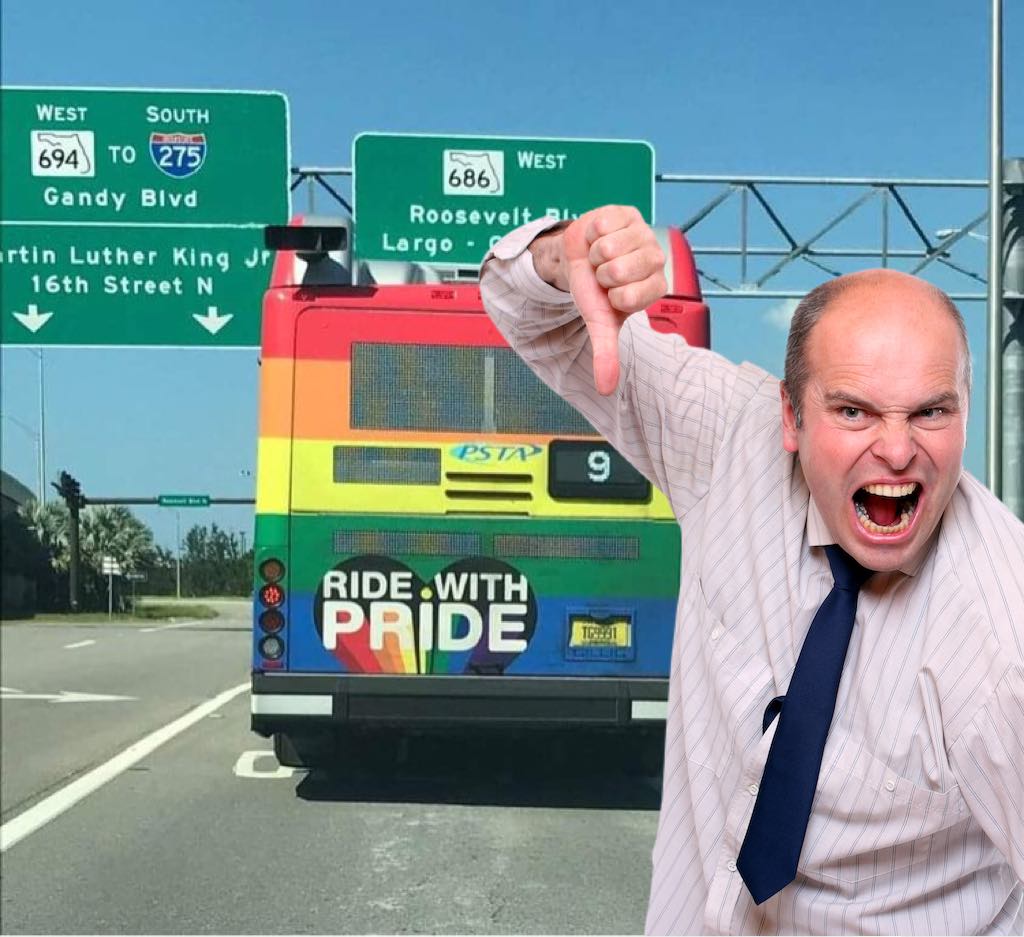 “Whoa, whoa, whoa! What the hell is this?”, Glanderson exclaimed when the rainbow-wrapped Route 9 bus pulled up to the stop at Dr. MLK Jr. Street North and 54th Avenue North. “You’re not taking me to Gayville, that’s for goddamn sure!”

The driver sighed heavily and said, “This bus doesn’t go to Gayville. We’re going to Grand Central Station at 31st Street North. You know that. You ride this bus every day.”

“Not this bus!”, replied Glanderson angrily.

“Goddamn, PrideFest itself ended over three months ago!” said the bus driver. “Man, just get on already.”

When Glanderson refused to move, the driver added, “Or you know what? Don’t get on. Nobody cares. I don’t have time for this shit.”

“No, thank you! Take your gay bus full of gays to Gayville so they can get to their gay jobs or go to a gay wedding or buy some gay groceries at a gay grocery store or pick up their gay kids at gay daycare or whatever other gay things they’re going to do gayly!”, Glanderson yelled at the bus as it drove off. “You’re not going to indoctrinate me into your deviant lifestyle, you perverts!”

Asked later to explain himself, Glanderson said, “Look, I don’t have anything against gays. As long as they don’t bother me, I don’t bother them. But I can’t be seen getting on and off an openly gay bus. I go to church! And everybody knows that the first step in getting good heterosexual Christians to question their faith is to trick them into flamboyant behavior like riding brightly-colored buses.”

PSTA spokesperson Stephanie Rank commented on the brief interruption in service. “Mr. Glanderson’s concerns are completely unwarranted on every level. Aside from the obvious and easily disproven myth that someone can be ‘turned’ gay, there’s the simple fact that we don’t offer bus service to Gayville because there’s no such place. Unless he’s talking about Kenwood, which is totally Gayville, but that’s the Central Avenue Trolley, not Route 9. Either way, he’s an idiot.”