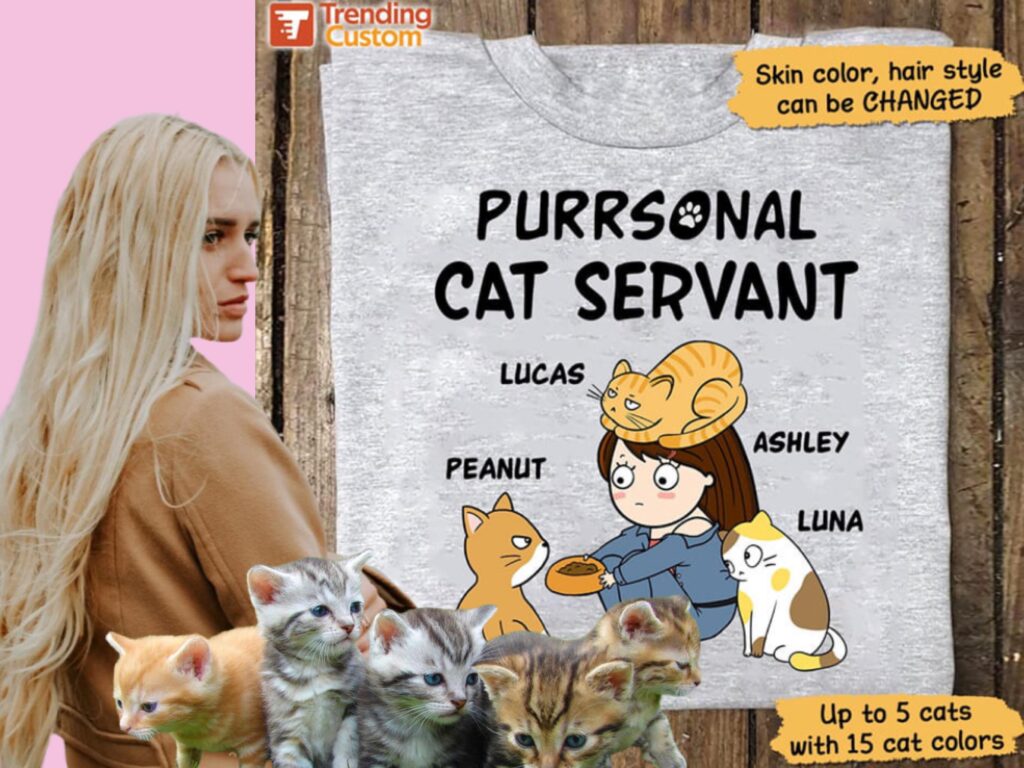 “It was an ad for a t-shirt that says ‘Purrsonal Cat Servant’ and at first I laughed because that’s me”, she said. “But then it made me really, really sad.”

Caswell said she doesn’t mind being called a crazy cat lady. “All my friends call me that and I don’t mind. I do love cats and heck, I’m probably a little crazy. I own it.”

When she saw the ad, her first impulse was to buy a shirt for herself. “Why not? Embrace your crazy, everyone!”

The shirt appealed to her on a number of levels. “It said you can customize it with the character’s individual appearance as well as having up to five cats with their own individual characteristics”, she said. “I have five cats and one of them is named Luna, just like in the ad! It seemed like it was meant for me.”

But something triggered her sadness as she was filling out the order form. “All these customizable options just seemed a little… I don’t know… desperate, I guess”, she said. “I suppose they just want someone to love them and their t-shirts and I can relate. Everybody wants and deserves love, including people, cats, t-shirts and t-shirts with cats on them. But how many t-shirts that need love are there? I can’t possibly buy and wear them all. But if I don’t who will? Then I pictured a warehouse somewhere with thousands of t-shirts that nobody will ever buy, and… and… Oh God, it’s all just so overwhelming!”

Rhonda Blisher, one of Caswell’s friends said, “Claudia just has a really big heart. Probably too big for her own good. We try to shield her from things like this but it’s impossible. You never know what might set her off. This time it’s fucking t-shirts. I love her dearly, she’s a genuinely kind and loving person, but sometimes it’s exhausting.”

Blisher added, “This is going to sound terrible but I wish she would meet a terrible boyfriend who would be really mean to her, just so she could become a little jaded and develop a harder shell. I’ve told her exactly that many times. It wouldn’t be good per se, but it would be good for her. But that’s probably not going to happen with all those cats around.”

“Oh well”, said Caswell. “That sucks for me, but good for the kitties!”