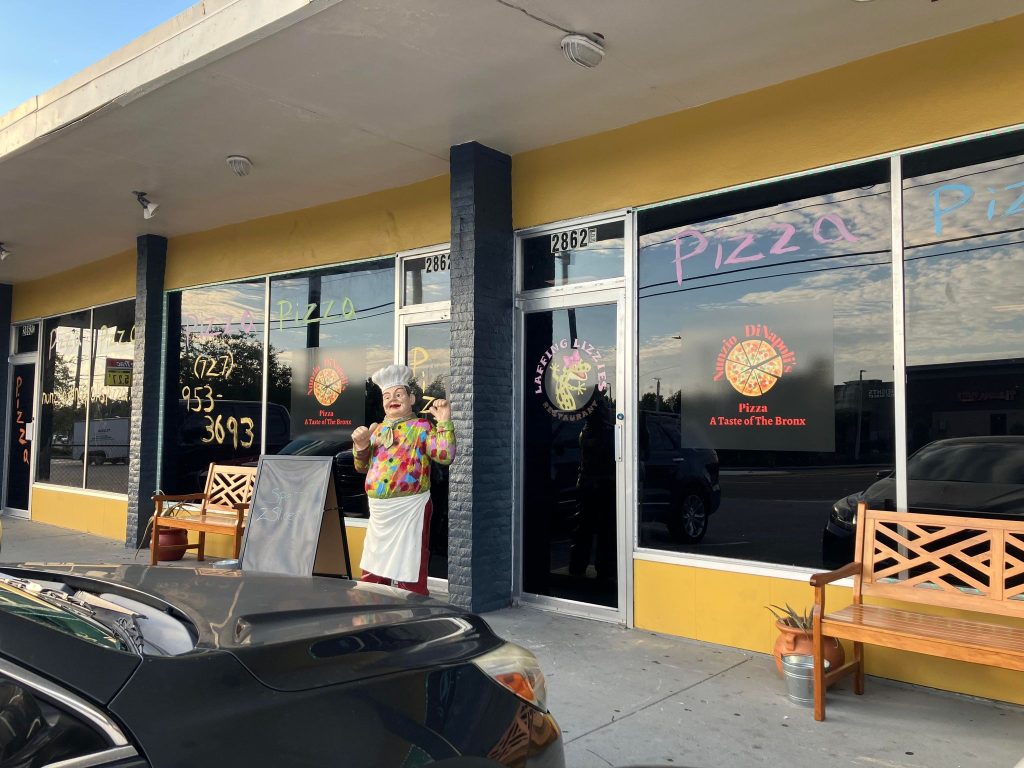 In order to bring you, the Tampa Bay Area community, the kind of hard-hitting investigative journalism you deserve, sometimes we send writers undercover to check things out and file reports on what they find out. By “undercover”, we mean we go there without telling them why we’re there.

That’s what we did yesterday with an establishment in Clearwater called Laffing Lizzie’s, an ersatz comedy club/New York style pizzeria.

First, a brief history of the Laffing Lizzie’s saga, from their own Facebook page which still says “We are excited to be bringing nationally touring stand up comics to Clearwater”.

There’s more, but this is a pretty good snapshot of how things have been handled so far.

Yesterday we decided to go see for ourselves exactly what was happening. Opening a new business is difficult. Maybe this was a case of a series of unfortunate instances of bad luck. Maybe eventually they’ll be able to present live comedy. Maybe this was nice local establishment making some mighty fine pizza in the mean time. Maybe all they need and deserve is a little support.

This is what the dining room looked like at the time this conversation took place:

Okay, ignore the carpet that could have been cleaned or replaced some time between June and October. Ignore the dining room décor that looks like it was inspired by the serial killer’s apartment in the movie “Se7en”. Ignore the heated discussion between staff members stoked by the pressure of having to serve two (2) customers. What about the pizza? If the pizza is good, lots of other things can be overlooked or forgiven. So what about the pizza?

Our reporter ordered the two slices and a soda lunch special advertised on the sign in front. The choice given was between cheese or pepperoni. The reporter chose cheese, figuring the most basic pizza would be the best one to evaluate fundamentally how good the pizza is. No adornments, less chances to screw it up. This and a can of Coke was what showed up. There’s no way to say this other than to say it was terrible pizza.

“Sex is like pizza. Even if it’s done bad, it’s still good.”

This is easily the worst pizza from a so-called restaurant that the reporter has ever had in their entire life. Dry. Bland. Chewy. Insipid. The very worst generic, grocery store-brand frozen pizza is significantly better than this.

All of this may sound like a negative review, but it’s not. It’s the opposite of that. Clearly what’s happening here is a brilliantly executed, elaborate Andy Kaufman-esque prank, which makes Laffing Lizzie’s not only the best comedy club in the Tampa Bay Area, but possibly the best in the entire world! Well done, Laffing Lizzie’s, well done!