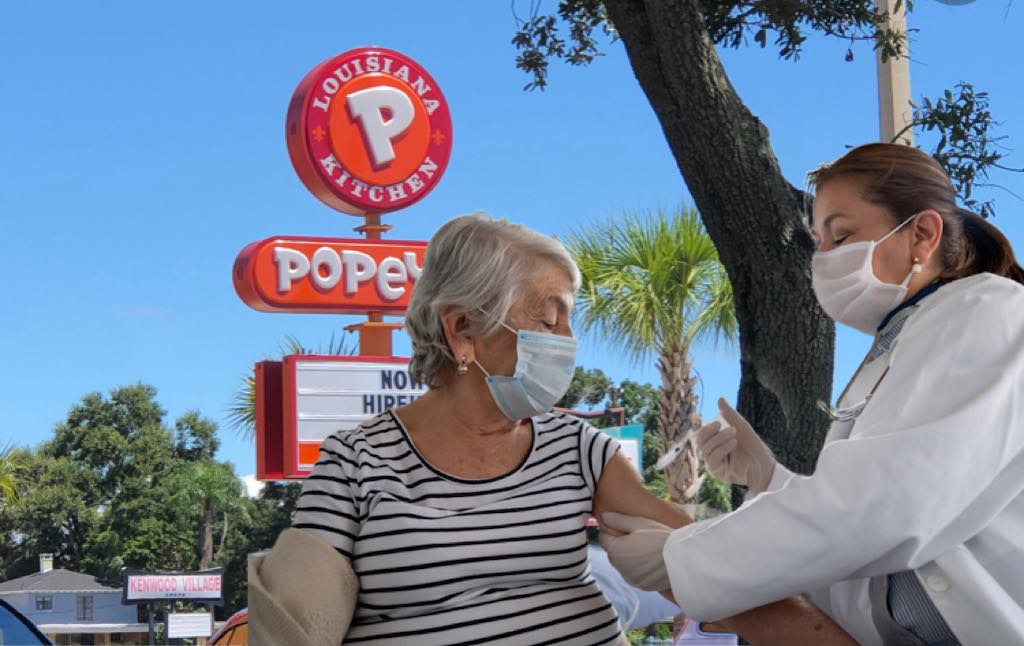 Madelyn Coddleton of Tampa recently received a vaccination to protect her against COVID and she’s not happy about it.

“I wanted to try that new Cajun Flounder Sandwich from Popeye’s that everybody is talking about”, she said. “I’m hungry, not sick!”

She got in a long line of cars outside the Tampa Greyhound Track at 755 E. Waters Avenue yesterday around 11:30 AM. “I couldn’t actually see the Popeye’s or even a sign for it”, she said. “But I assumed with the line being that long, that had to be what was going on.”

When informed that the nearest Popeye’s Louisiana Kitchen location is at 2701 E. Busch Boulevard, over two miles away, she replied, “Okay, sure. But look around that neighborhood. You can see why someone would think there was Popeye’s there.” When she was asked to elaborate, she narrowed her eyes and said, “I think you know what I’m saying.”

She said she was waiting patiently in the long line – “All I could think of was how good that sandwich must be” – when a woman, who turned out to be a physician approached her car.

“I rolled down my window to tell her I didn’t have any spare change and she jabbed me in the arm! Like it wasn’t enough that somebody had already tagged my windshield with gang graffiti. You expect some rough treatment when you go into those kinds of neighborhoods but this was too much!”

“Great. So now I’m not going to die from COVID, but I guess nobody cares that I could starve to death”, she said while at least 10 pounds overweight, possibly more. “This country is screwed up.”