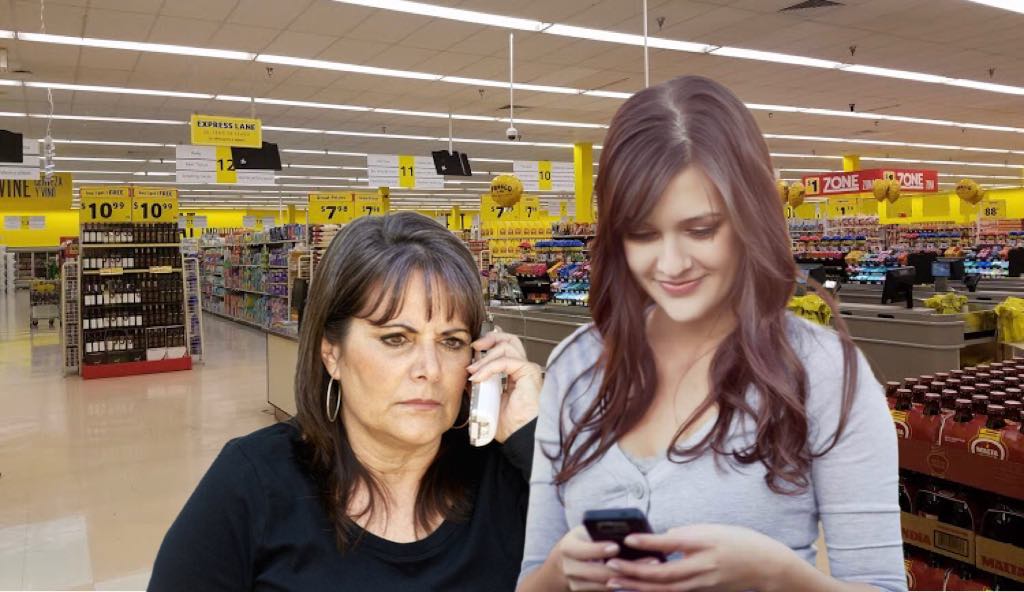 A woman engaged in a private text conversation while shopping at the Fresco y Más store on Armenia Avenue in Tampa was confronted by another shopper, unhappy with the language the woman used to express herself.

“She was texting and laughing, so I looked to see what was so funny and I could see that she had typed ‘JAJAJAJAJA’ instead of ‘Ha ha ha!’ or ‘LOL’,” said Marjorie Croissant of Tampa. “I assume that’s Spanish because I couldn’t read any of it and that she must be using that as code to talk about me. I won’t stand for that so damn right I said something.”

The woman she confronted, Karen Vasquez of West Tampa said, “What the actual fuck?!? How is what I say to someone in a private conversation, and how I choose to say it, any of her business?” in perfect English.

The exchange consisted of Croissant gesturing violently and yelling at Vasquez while Vasquez stood there, looking confused. Store employees intervened and separated the women before the situation could escalate.

Fresco y Más is a chain of grocery store that offers a variety of authentic Hispanic products in addition to meat, produce, toiletries and other items found in any grocery store. The store markets itself as “Your Hispanic Grocery Store”.

“Right. My Hispanic grocery store”, said Croissant. “I’m an American, I’m in America and so is the store. And in America, English is the official language!”

“Well, that simply isn’t true,” replied Vasquez. “And how typically arrogant and privileged to automatically presume that everything is about her, including a texting conversation between people she doesn’t even know.”

“Why was she even shopping there?”, asked Vasquez. “I’m not saying she can’t; anybody should be able to shop wherever they want. I go to Publix all the time. But if somebody has a problem with the Spanish language, why would they choose to go somewhere that specializes in providing Hispanic products? It doesn’t make any sense.”

“Not that what I do should matter to someone else,” said Croissant without a slight trace of irony or self-awareness. “But I shop there because I happen to like the El Sembrador brand of frozen yuca among other things I get there like salsa and guacamole. They just taste more Spanish-er than what I might find at Winn Dixie or Publix. Just because I like Spanish flavor doesn’t mean I want to be assaulted by listening to it or reading it over some stranger’s shoulder.”

“You want to talk about irony; I was texting my friend Danielle about the ugly ass yoga pants she (Croissant) was wearing”, said Vasquez. “That doesn’t justify her reaction. Just because it was about her and her poor taste in clothing to wear in public, it was still an A-B conversation and she should si her way out of it.”