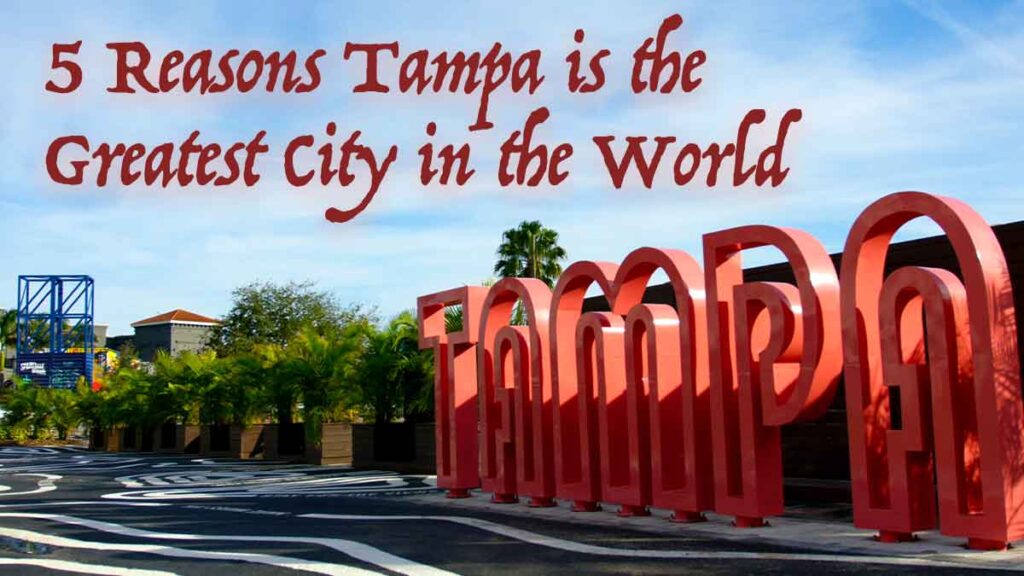 Everyone loves the ocean! Tampa is a perfect hub for all your beach travel needs. Head to St. Pete, or Clearwater, or Indian Rocks, or one of the other dozens of beaches accessible from the central Tampa area.

Tampa offers all of the big city features with few of the drawbacks. You can still get authentic decadent cuisine without the crowds and lines and parking issues. You can see your favorite performer when they come to town without worrying about tickets selling out immediately. You can do things in a much more relaxed and fashionable pace. Live life at your own speed! It’s better that way! Don’t let society tell you what’s right for everyone when everyone is different! Only you can decide what’s perfect, and Tampa is the perfect place for you to make that decision.

One time I was waiting in the lobby of a movie theater, and the man serving behind the theater bar said, “You can live like a king off $40,000 a year in Tampa.” And he wasn’t wrong.

For 40K a year you can truly indulge in luxuries and experiences that would cost at least triple in New York City or other equivalent metropolises. You can live very well with a relatively affordable lifestyle.

If all the cities in Florida were like children, Miami would be the shining star, and Tampa would be the younger brother who is also well-to-do, just not as accomplished as Miami, but similar qualities to what makes Miami so great. Tampa is trying it’s best, it knows it’s not in the spotlight, it knows it gets the butt-end of national jokes on a fairly regular basis, but that’s only because the rest of the country thinks about us. We’re a joke because of our laid back lifestyle and perceived ignorance, however we’re not dumb, we’re just chill. That’s the difference. We’re all reasonable people, we just don’t judge others who don’t have it together as we do. We’re fine living around meth and crack and occasional violence because our lives are so solid, it’s not the end of the world when a sexual predator exposes himself in Walmart. There are unpleasantries all throughout life, however the people of Tampa seem to handle them better than probably most other cities in the world. We all mind our business and don’t spend much time dwelling on what the next person is doing. We don’t have an agenda, we’re happy to exist and live in our city with the ability to do all of the great things we do.

Tampa is home to the longest unbroken sidewalk in the world with Bayshore Boulevard. That’s pretty cool. We’re number one! Something so simple and basic as a sidewalk, and we perfected the ground floor of humanity. The first invention ever. Paved space to walk. We did it. We’re the best. We’re the greatest. Nobody can tell us any different. And if their place was so great, then why do they fly to Florida every year? Exactly, because it’s the greatest place on earth, and Tampa is the greatest city in it. Also, invest in Tampa News Force, buy our NFTs.