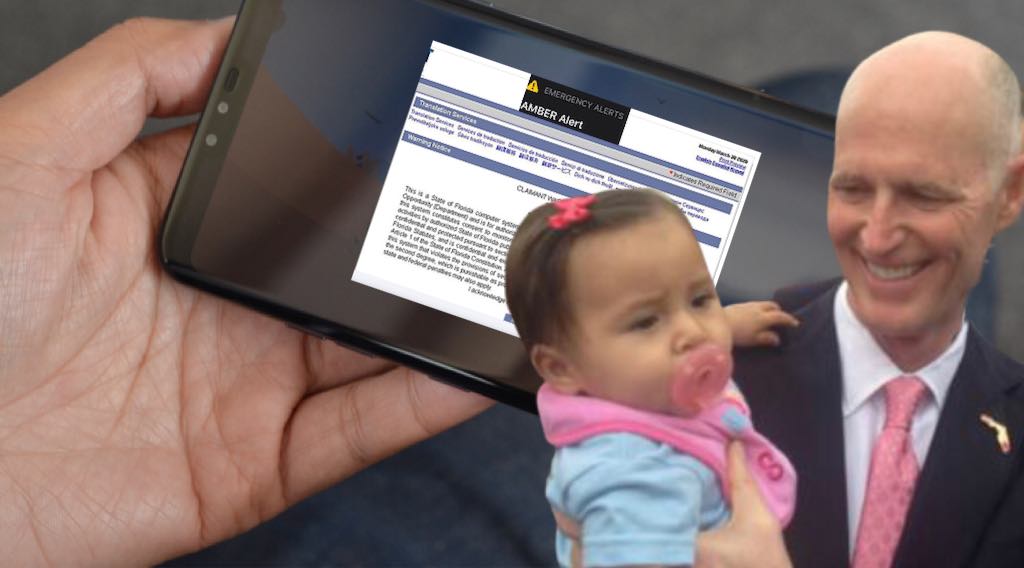 US Senator and former Florida Governor Rick Scott has announced a comprehensive plan to overhaul the AMBER Alert program, which issues emergency messages when law enforcement officials determine that a child has been abducted and is in imminent danger.

Scott says there are a number of flaws in the current system that need to be addressed. “For one thing, it’s too easy to use. Basically, any accredited law enforcement agency can issue an AMBER Alert, based entirely on nothing but deciding that it’s necessary, and then it goes out instantaneously. There’s no waiting. There’s no hours or days when the service is inexplicably unavailable to people who need it. There are no pointless, repetitive forms to fill out and no dead-end steps in the process that arbitrarily require the user to start all over from the beginning. That’s no way to run a government agency.”

“Plus, it’s loud”, he added. “It’s so very, very loud and my species does not respond well to loud screeching noises unless we’re the ones making them.”

“I’m the one who totally revamped Florida’s unemployment system; there’s no reason I can’t do it again in this case, with equally spectacular results”, said Scott.

Scott says he can implement his changes at a reasonable cost to taxpayers – “It should only cost about $78 million”, he said – although he questions whether the system is necessary at all.

“I’m not sure we need a system to send out emergency messages to locate kids in danger. Let’s face it; it’s really not that difficult to find children, especially infants who can’t travel very far or fast or fight back and defend themselves”, he said, nodding to the baby he was holding in his arms at that very moment. “I plucked this out of a car seat at Publix a couple of hours ago and I wasn’t even looking for one!”

In other news, an AMBER Alert has been issued for 6-week-old Deandra McNugget, abducted from the Publix on Nebraska Avenue in Tampa by an unknown assailant described by witnesses as “an upright-walking albino lizard thing.”