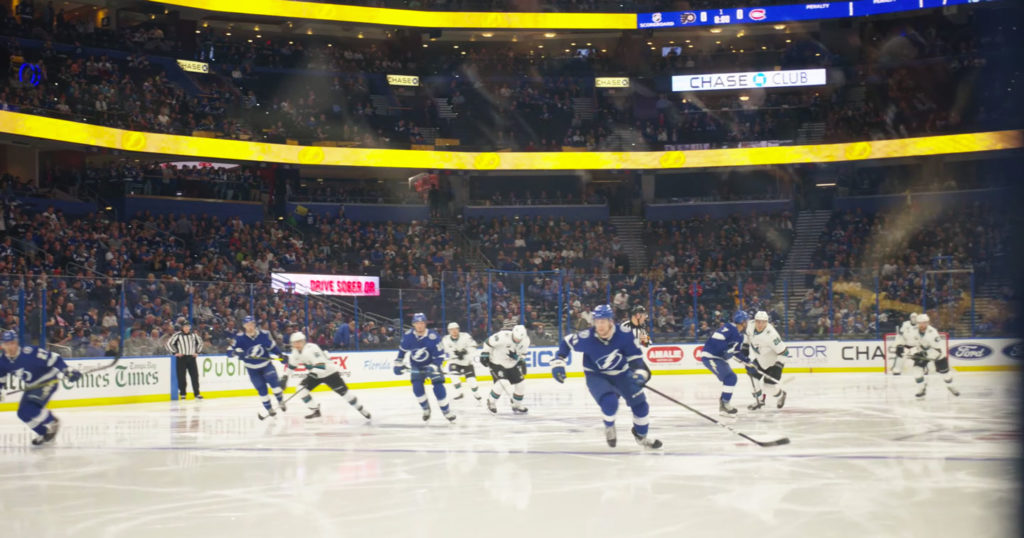 With the Tampa Bay Lightning ranking first place amongst the NHL, locals and team-members alike have been wondering, “How are we going to screw this up?”

Some have hypothesized that the Lightning will have a deep playoff run and lose in the Eastern conference finals, while others worry the team will simply lose momentum all-together during as the regular season ends.

Back-up blade-sharpener for the team, Justin Krewvinksi, was kind enough to talk to us on his way to the bathroom.

He walks faster towards the bathroom, but I pick up my pace. “I mean, if you really want to talk, you can stand next to the stall while I go, but it’s going to be a stinker, I had Thai for lunch.” I follow him into the bathroom.

“I think we’re going collapse under pressure.” Justin says between loud echoey farts. “I’ve been sharpening these guys skates for years, and I don’t know if it’s just they like to party too much when they start winning or something,” He lets out an overwhelmingly obnoxious, burst of flatulence, “Or maybe they’re just not mentally ready. I mean, sometimes I sneak my way onto the guest-list at Am-Sosh (American Social) and I hear them gossiping, and all they talk about is sex and booze, it’s kind of juvenile.” Justin then throws up between his own legs while he’s still on the toilet.

“Oh God!” He shouts. “Sometimes it comes out the wrong hole! Right through the 5-hole!” He jokes. “Anyways, I shouldn’t be talking to journalists, but it’s not like you guys are real news right? Do you have an LLC?”

I explain to Justin that Tampa News Force is indeed a limited liability corporation, and despite being satire, or “fake news” as the heads of state would call it, we are in fact, a “real” company.

Justin picks up one of his newly sharpened skates and holds it to my neck. “If your stupid rag of a tabloid nonsense-journalism whatever the hell you want to call it,” he’s flustered by his lack of words, “publishes anything I just said, I’m going to cut your throat!”

I swear not to report any of his words, however I did have my fingers crossed.

I finally leave the arena bathroom to find some fans wandering.

“What do you want?” A beautifully drunk woman mockingly asks me.

“I’m just asking fans and staff members their opinion on the Lightnings hot record and whether you think they’ll be able to maintain the momentum, or they’ll let us down like they have over the last 15 years.” She puts a newly sharpened skate to my neck.

She chugs a full $14 Michelob Ultra in my face while making eye contact then spits at me.

“Mean.” I whisper under my breath.

“What did you just say!” She violently snaps her head around to death-stare me once again, but I sprint as fast as I can in the opposite direction.

“This can’t be real,” I say. “There’s just no way people could act like this in public and think it’s acceptable. Is it me? Have I done something wrong? Has my disheveled appearance and sarcastically aloof attitude inadvertently brought negativity on myself? Is that what God wants for me?” As I have that thought, I can hear the Tesla coils going off in the arena. Louder than normal.

I walk to the center of the arena, no game is going on, nobody is around, but the Tesla coils are wildly shooting lightning bolts in every direction, very unsafe. I get struck by lightning.

“Ahh!” I scream in severe agony. “No!” I scream louder before losing consciousness.

I’m now in a vast infinity made of clouds with ambient harp music playing. An indescribable torrent of energy surrounds me and fills me with a purity and love I’ve never felt before. “God? Is that you?” I ask.

“Yes John, it’s me. God.” I’m totally in disbelief. “I revved up the Tesla coils to strike you unconscious to bring you here to have a word.”

“Of course, whatever you need, I love you!” I say.

“Well…” God says. “I don’t really like you questioning the strength of your local professional hockey team.” He says. “If you don’t have faith in your team, they won’t have faith in you, and as their marketing campaign has mentioned numerous times, they need you to ‘be the Thunder.’”

“No, not the Oklahoma Thunder,” God says. “Like, the thunder noise, after you see lightning. The Lightning dazzle you, then as a fan, and faithful supporter, you’re supposed to make loud noise, in support of their righteous actions. Get it? ‘Be the Thunder.’ Have faith my son. Every city has their time. And with a little faith, this might just be your year.” He winks at me, then disappears in a flash.

I wake up to a zamboni driver dumping a mop bucket full of hot yellow liquid onto my face.

“Jesus Christ kid! You just got struck by lightning!” He said disgustedly while mopping up.

I come to, and try to compose myself.

“I… I…” I contemplate trying to explain to the man that I met God, but reconsider due to the complexity and time-consuming task of explaining what I just experienced. “Never mind.” I say. “Why do I smell so bad?” I ask.

“Well, I took a long lunch today, and I didn’t really have time to take a bathroom break, so I just used the mop bucket that was in the trunk of the Zamboni.” He shrugs.

“Yea I know Justin,” says the zamboni driver. “He’s been sharpening skates here for many years, great guy, he would never do anything I don’t support or agree with 100%.”

I pause for a moment and reflect on everything that’s happened to me over the last 15 minutes.

“Me neither.” I say. Then the zamboni driver winks at me and the whole room turns into a 3D rendering of an old wooden castle and it burns to the ground in front of me while I scream in pain from the third-degree-burns.

Just kidding about that last part. But all the other stuff, Justin farting, the woman threatening me, meeting God, having the Zamboni driver dump his less-than-sanitary bucket on me. That. That was also fake as well. This is a fake satire story. And this was a particularly long story too. Wow. And I’m not even high for this one! Dead sober at 1:43 am on a Monday night and these are just my natural thoughts.

I shrug. Welp, fingers crossed for the Lightning winning the cup this year!

(Also, how come earlier in the story, fingers crossed implied I was lying to Justin, but in other terms crossing your fingers is a sign of “hoping for the best?” Why does crossing your fingers have numerous meanings and interpretations? Maybe we’ll never know. But there’s one thing we do know right now. The Tampa Bay Lightning have the winningest record in the NHL. And hopefully I don’t jinx that. And hopefully “Jinxes” aren’t real. But it feels like they are sometimes. Whatever, goodnight, I gotta go to sleep guys. Just kidding, I need to write like two more articles. Wish me luck!)