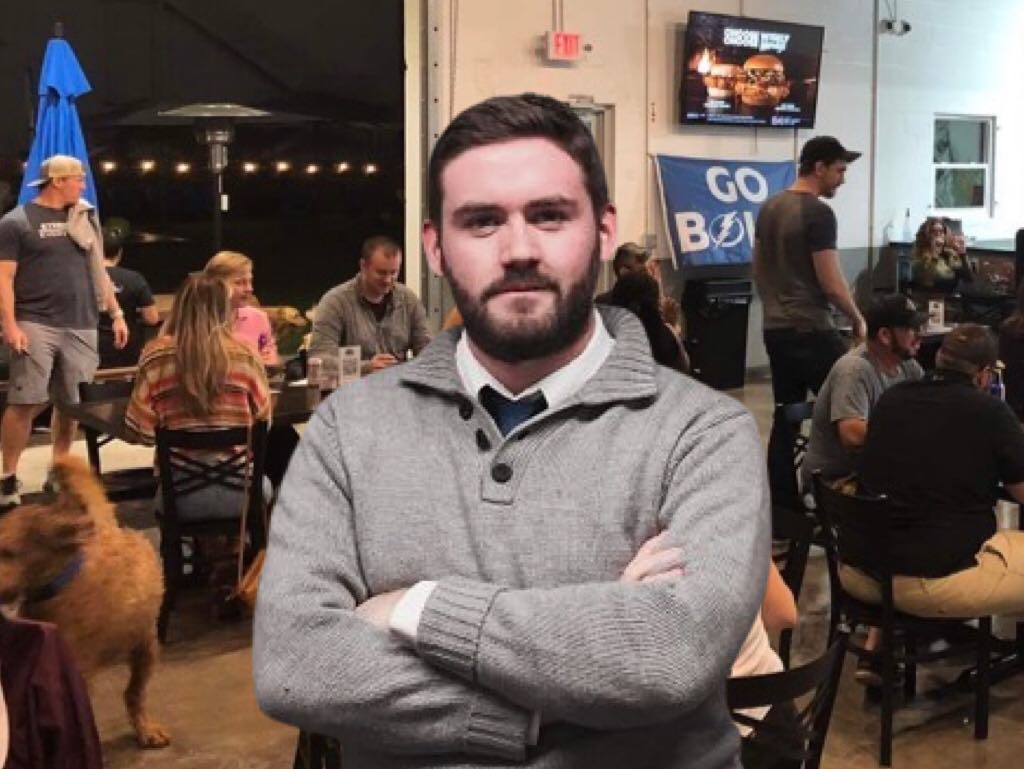 “I don’t just host a trivia night at a bar; I’m a Quizmaster,” he said, presenting a business card reading, ‘Chet Dinkley; Quizmaster’. “It’s a position of authority. People come to me to learn and become better versions of themselves and I take that responsibility very seriously.”

“We come to hang out with our friends and compete at trivia,” said regular trivia night attendee Brian Hoolf and Captain of the team that calls itself the Beer Buzzers. “Whoever the host is doesn’t matter.”

“If I’m being honest, sometimes I learn from them too. But mostly, yeah, it’s them learning from me, obviously. Because I’m the Quizmaster,” said Dinkley. “But we’re really more of a family at this point. Yeah. We’re really kind of a family.”

Dinkley said he sometimes has to give the teams that compete every week for a $25 bar tab what he describes as ‘tough love’.

Recently at McFats, every team got a question about a naval battle during the Spanish Civil War incorrect.

“Come on, gang. We’re better than this,” Dinkley said admonishing a room full of legal-to-vote-and-drink adults like children. “The answer is the Battle of Cape Cherchell. One of you actually wrote Bombardment of Almería, even though that was four months earlier. Four full months! Unbelievable. I guess that’s better than writing nothing, which is what many of you did… but not by much. Let’s focus, people.”

“Yeah, my team was one of those that wrote nothing. The Spanish Civil War happened in 1937. In Spain. Why is that even a topic?” said Hoolf. “Actually, that’s not true; the answer we submitted was a drawing of – Chet, is it? – being sexually assaulted from behind by a horse.”

“I don’t think that was supposed to be me,” said Dinkley, chuckling dismissively.

“It was 100% him,” said Hoolf. “I even made sure that the picture depicted him in the 80s band t-shirt he was wearing ironically that night, with an arrow pointing to him that said ‘THIS IS YOU’.”

Beyond the game itself, Dinkley has taken to trying to get involved in the personal lives of some of the players. Last week, he approached DeeAnn Cruller, a member of The Triviots team, during the game’s intermission.

“How are you, DeeAnn? I notice Josh isn’t here tonight; is everything okay?” Dinkley said, referencing Cruller’s fiancé and putting his hand on her knee.

“Yeah, Josh had to work late so he couldn’t make it out tonight. Everything is fine,” she said, shifting in her seat.

“Is it, DeeAnn? Is it? Is it really?” Dinkley responded, expressing concern by furrowing his brow and pursing his lips.

Asked to comment on the interaction later, Cruller said, “Ew.”

“I think they know and appreciate that I’m here for them, no matter what,” said Dinkley. “Because we’re a family and I’m their Quizmaster.”

“Yeah, I think we’re going to hit this spot we heard about in Tampa for trivia tomorrow instead,” said Hoolf. “Sure, it’s 40 minutes away from where we all live but it’s gotta be better than another weekly class in Professor Chet’s Ding Dong College or whatever perverted alternate reality he’s got going in that enormous melon of his.”