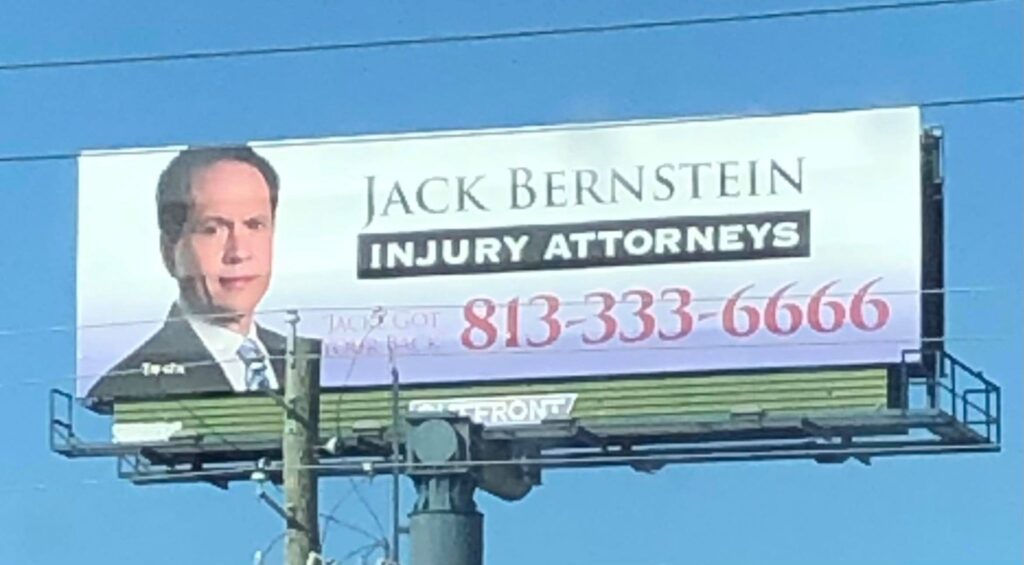 A billboard on Dale Mabry Highway in Tampa advertising a Tampa injury attorney’s practice is casting looks of scorn and derision upon northbound commuters.

The billboard, located on the east side of Dale Mabry, right next to the Chipotle that’s just south of Columbus Avenue, features contact information for Jack Bernstein’s legal practice but is dominated by a photo of Bernstein with a facial expression intended to portray a sense of gravitas.

“He looks like he’s disgusted”, said John Ratzass of Carrollwood. “He looks like he knows I farted in my car and he can smell it and he doesn’t like it. Which is unfair, because I don’t always fart in my car. But I still have to look at his judgey face on my way home from work every day, whether I’m basking in the fumes of my own stench fog or not.”

“The sense I get from it is that we’re literally beneath him”, said Sheila Harangue, also of Carrollwood. “He’s looking down at us as if to say, ‘Look at you pitiful creatures. Clambering after morsels of… what? Money? Love? Spiritual redemption? Anything to dull the ache of your mundane, meaningless parasitic existence as you shamble toward the inevitable relief that can only come from death’s icy embrace. You poor, mindless shells. How pathetic. You sicken me.’ I was a poetry major in college and I get stuck at the light at Spruce quite often, so…”

Northbound motorists on Dale Mabry should expect the condescension and antipathy from Mr. Bernstein to continue until the billboard is replaced by an ad for a different injury lawyer or a cell phone carrier or maybe Outback Steakhouse or something.