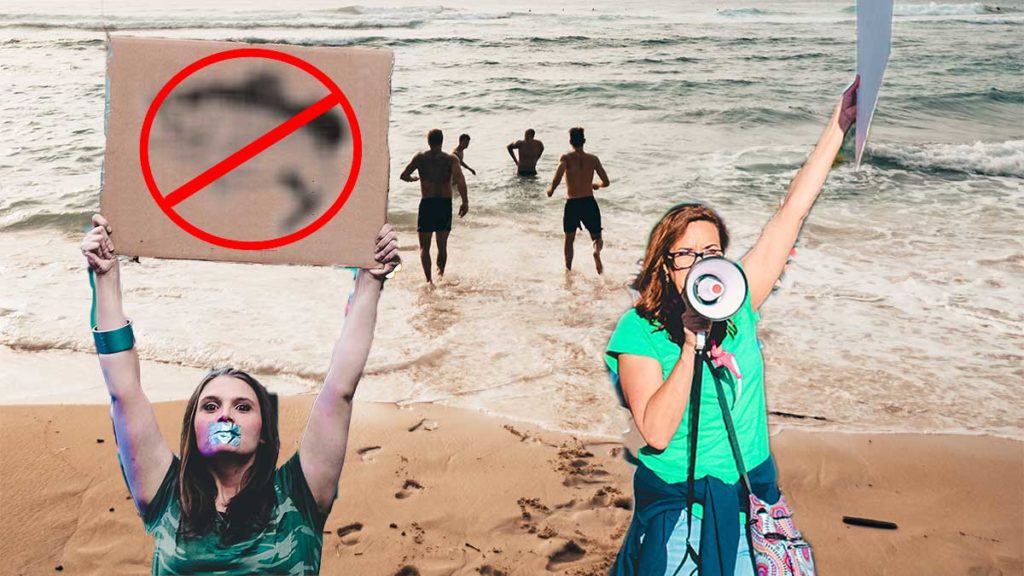 Following a bizarre weather anomaly that caused thousands of so-called “penis fish” to wash up on Drake’s Beach, just north of San Francisco, California, Tampa Bay area residents are letting it be known that they don’t want that to happen here.

Plant City’s Tanya Grinnell was among a large group who showed up at Pass-A-Grille beach to protest a possible invasion from the phallic sea creatures. “How am I supposed to explain to my children who don’t know what a penis is, that these penis fish also are not penises?” She says, “As a parent, I want a say in when and how my kids are exposed to penises. Wait. That’s not what I mean.”

Urechis unicinctus is a species of marine spoon worm is also known as the “Fat Innkeeper Worm” or “Chinese Penis Fish” or “Wang Worm” or “Winky Wiggler” or “Blind Cave Salamander”, with the last three of those not being true.

What is true is that the worms live their entire lives underground, burrowing beneath the wet sand along the California coast. Powerful storms that hit Drakes Beach around Thanksgiving dumped an inch of rain and wind gusts of 45 miles an hour on the area, which was most likely why the worms now surfaced, Parr told CNN. The reason they stay hidden is that otherwise otters, seagulls and humans could prey on them. They are a salty, South Korean delicacy, which is not only 100% true but also hilarious.

“Tampa Bay is no place for this kind of obscene wildlife nonsense and we want to let them know before they get the wrong idea,” says St. Pete’s Gary Flintner. “Laying around on a beach throbbing and engorged might be all well and good for a place like California, with their well-earned reputation for debauchery and depraved behavior, but this is Florida and…” Flintner paused to think about what he’d just said, tossed his sign in a trash can, got in his car and drove away.

Dr. Dick Bonerz of the University of Penisylvania says that Tampa Bay residents have nothing to worry about, as the species is not present in the area. “I never said that and I don’t know why you’re asking me about it, as I teach English Literature and have no knowledge of marine biology. Oh wait, it’s because of my name, isn’t it? You bunch of bastards!”