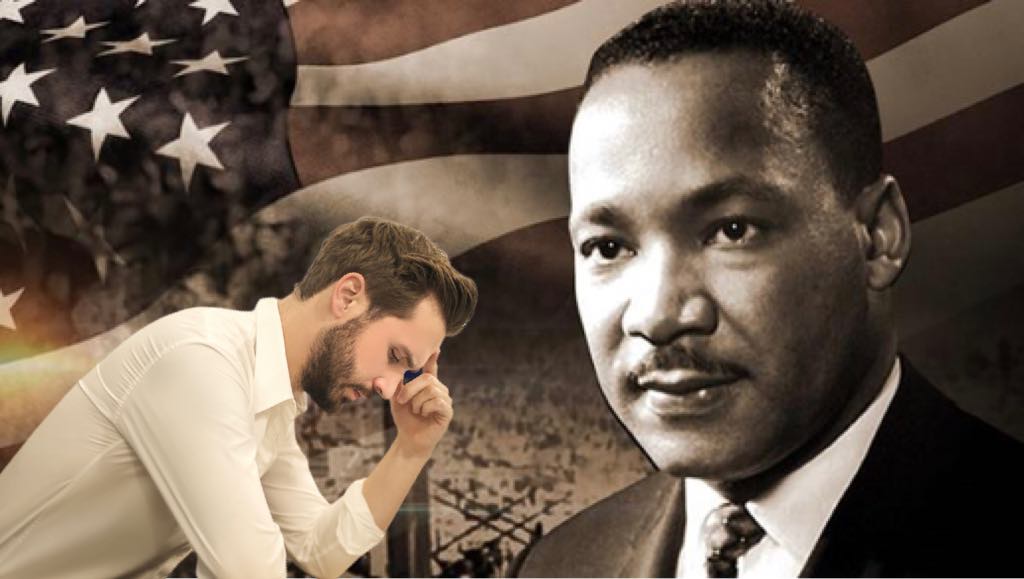 “I’m very passionate about this. I’m not even going to watch the Bucs game”, said Plumeley. “Well, I’ll have it on but I’ll be focused much more on what’s on my phone, especially during commercials and halftime.”

He said he already has the perfect picture to which he’ll eventually add a suitable caption before posting it bright and early Monday morning. “It’s in black and white which is great because it looks somber and old-timey and plus that’s a metaphor. If black and white can put aside their obvious differences and work together to make a beautiful photo, we should be able to work together to make a beautiful America.”

“I need to find something Dr. King said in a little black church in a small Alabama town, before he got famous”, he said. “That’s how you establish MLKred.”

Winning the day is very important to him. “It’s not a sanctioned thing with rules and scorekeeping, but the competition among white people to demonstrate their compassion towards the others and how that makes some of us superior to our friends and relatives… not black people!… is very real”, he said. “You only get one day every year to make this kind of meaningful, symbolic gesture; you can’t blow it. Well, there’s also Black History Month in February but that’s for posting captioned photos of Jackie Robinson and Rosa Parks and people like that. I’m looking forward to that, too. I’ve got something special planned that’s gonna blow everybody away. I don’t want to spoil it but I’ll give you a hint: it’ll feature Chadwick Boseman because he’s black and dead now!”

“I can’t wait until Denzel Washington dies because ‘Training Day’ is my all-time favorite movie”, he said.

Plumeley considers himself a devotee of Dr. King and his teachings. “Everybody knows the history of Martin Luther King; in 1968 he gave the famous one-line speech, ‘I had a dream’ and as soon as he said that, somebody shot him. But did you know that in his life he said and did more than that? Well, he did”, he said smugly. “And even though white people and black people have been getting along great ever since, black people are still mad about it so once a year we have to remind them that we feel bad about it too. That’s why once a year we take to Facebook and Twitter and Instagram to post the perfect captioned picture, so they’ll know. Even more importantly, we, white people have to condescendingly remind each other how badly we feel about it.”

He went on to say, “A lot of people will just copy and paste the famous dreaming speech itself, but that’s for amateurs. I go for the deep cuts.” He pursed his lips, pretended to almost lose his composure briefly, making sure I noticed before adding, “It’s so important, especially now, in this day and age, which is something I also say every year.”

He stared wistfully out of a window and said, “I don’t know why we can’t just all come together as brothers and sisters like Dr. King dreamed about, you know? But this is how I do my part to try to help us heal. It’s literally the least I can do. Maybe this year, we’ll start to see the change we all want. And maybe this will be the year that Rodney, this guy at my gym, will accept my Friend Request so he can finally see what a good white person I am. He’s black, by the way”, he wiped away an invisible tear and said, “It all starts with Rodney. The ball is in his court. And not necessarily a basketball court; it could totally be tennis because I am not a racist.”