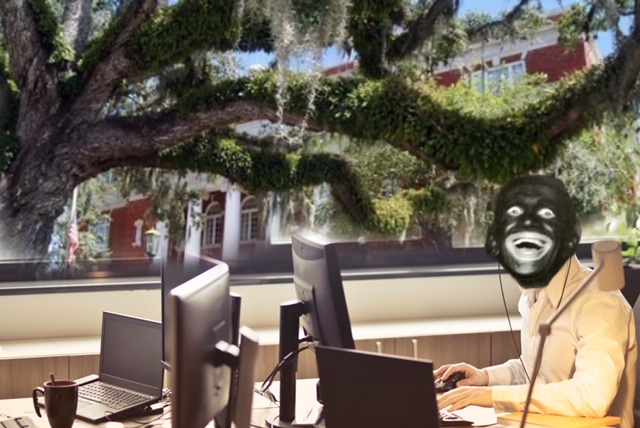 Todd Barbersack of Brooksville is a social media influencer and app designer, who believes he has invented what will be the next big thing in social media.

He says, “It’s called MinstrelGram and it’s designed to celebrate a sadly unappreciated and forgotten form of very specific American entertainment: white people putting on blackface make-up to degrade and mock black people for the amusement of other white people. People are probably going to say it’s a little racist, and by that many people are already saying it’s extremely racist. But we’re in Brooksville so that’s not necessarily negative feedback. The reality is that it isn’t about bigotry and oppression, it’s simply celebrating American history!” He was wearing blackface when I met him at his office in Brooksville. “I’m very brand-conscious” he said, as he gestured to the view of the notorious Hanging Tree outside his window. “Isn’t it magnificent?”

He says the way it will work is users will create accounts to connect on-line with other users and then share photos, videos and other memories of old vaudeville performances from classic stars of yesteryear like Al Jolson, Amos & Andy, George Jessel, Butterbeans & Susie, Pigmeat Markham and Jimmy Kimmel, portraying such classic minstrel characters as Jim Crow, the Yaller Gal, Zip Coon, Mammy, Brudder Tambo and Jimmy Kimmel. “All broad characterizations from so long ago that they couldn’t possibly cause any harm today,” Barbersack says.

I told him that every single aspect of the concept sounded really offensive and asked if there was even a market for such a seemingly niche service. “You know, four years ago I would have said no”, he answered. “Now though, times have changed! Or maybe they haven’t. Who knows? I certainly don’t! Regardless, these days, all the data indicates that the target audience for this platform is no longer shy about letting you know they’re out there.”

“We’re already generating buzz on Parler and among members of the formerly-ambiguously-racist-but-suddenly-now-openly-and-aggressively racist Proud Boys!”

At this point, I think he sensed my growing discomfort with everything about him and his app and my sense that it was not a good idea, and he continued to try to defend it.

“Look. You know how they have ‘BlackPeopleMeet.com‘, so black people can, you know, meet each other? That site’s not considered racist by most reasonable people! Well, there’s no such thing as ‘PeopleWhoDislikeBlackPeopleMeet.com’ but this app is for those people who might sign up for something like that if it existed”, he says. “So the platform itself is not inherently racist. It’s just designed for and marketed toward people who are inherently racist. See? No big deal.”

He sat back in his office chair, grinned smugly and sighed with self-satisfaction before asking me, “So what do you think?” I replied, “Honestly? I think you’re going to get murdered.” He followed up, “Financially? Yeah, maybe at first. Most start-ups lose money in the beginning and that’s just something you have to…” and I said, “No, not financially, but probably that too.” He sat back and sighed again, more resigned than self-satisfied and no longer grinning, as he muttered softly, “Oh shit.”

I got up to leave as he called someone on his cell phone and I heard him say, “Hey Roger, I’ve been thinking that maybe we should make some changes to the app, like going back to the original name: BrooksvilleBook.”