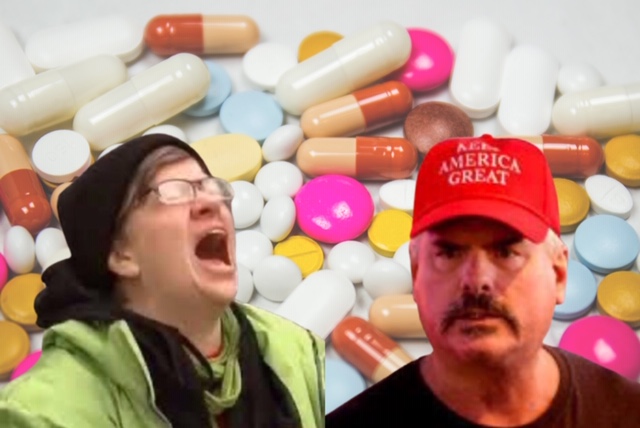 Shakewell Pharmaceutical Laboratory, a commercial manufacturer of medicine here in Tampa has developed a new pill for those who are suffering from crippling optimism.

“People have been so unhappy about so much for so long. This has become their lives and even though they’re absolutely miserable, this is their comfort zone”, said company spokesperson Kaitlyn Wounded. “It’s for these people that we developed Suxzobad.”

She went on to say, “Seeing crowds express their relief with spontaneous displays of joy like dancing in the streets upon learning the results of the recently semi-completed presidential election triggers intense feelings of discomfort for some people. They may involuntarily start bobbing their heads and tapping their feet. Left unchecked, these mild symptoms can lead to more severe manifestations like the waving of one’s hands in the air, often without an appropriate level of concern or care, and pelvic thrusts. And it’s not just conservative people; plenty of liberals hate being happy too! One’s political orientation alone does not lend itself to being a victim of unwanted hopefulness. As much as people invested in being upset by every single aspect of this election, to have their lifestyles snatched away from them just isn’t fair. We set out to help these people get their sad, sorry lives back so we created the world’s first anti-antidepressant. Or simply, depressant.”

The science behind Suxzobad is similar to other mood management treatments. The pill contains an active ingredient that unlocks chemicals in the brain that remind the user that ultimately the results of an election don’t automatically mean instant resolution of serious social issues and that all elected officials are essentially very similar, if not exactly the same. It’s not just about political issues. Wounded said, “as adorable as puppies kitties and human babies are, caring for them is expensive and a lot of work that involves having to clean up their shit.“

“Systemic racism isn’t going to end anytime soon and pedophilia will probably never be legalized… but both of those things, as unlikely as they are to occur, could happen at some point. That’s enough to cause anxiety for many different people for many different reasons, but others aren’t that troubled. That’s who needs Suxzobad, so they can have their worry-driven lives back”, said Wounded. “Our slogan is, ‘When everything seems to be going great, don’t forget (everything actually) Suxzobad’. And that’s as true now as it was a couple of weeks ago.”