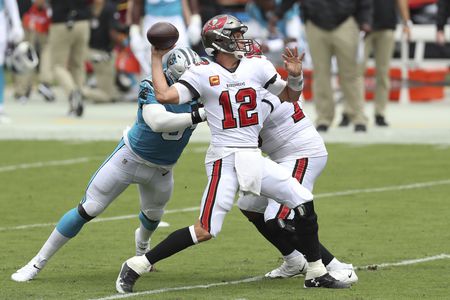 Following the Tampa Bay Buccaneers 31-17 defeat of the Carolina Panthers at Raymond James Stadium on Sunday afternoon, plans to cancel the team’s season after a season opening loss to the New Orleans Saints last week have been rescinded.

“As you are all aware, last week was a devastating emotional loss as Tom Brady was revealed not to be a superhuman“, says head coach Bruce Arians. “Confronted with that harsh reality, we were gonna just chuck the whole thing. What was the point? But we learned that the Panthers had already purchased their plane tickets and they’re non-refundable. None of us had plans today, so what the heck, we showed up and we actually won! Game on!”

Brady went 23-for-35, 217 yards with one touchdown and one interception against Carolina, which is still not the God-like performance Tampa Bay fans are unreasonably expecting every time he takes the field, but good enough to get the win today and even go ahead and pursue future victories this season.

“Our winning percentage went up 500 points with this one win. If we can do that again next week, we’ll be back to 1.000, undefeated!”, says tight end Rob Gronkowski, demonstrating a lack of basic understanding of math.